Bingo Dab is an app that has been designed to revolutionize mobile gaming experience for lovers of Bingo. This app will give a gaming experience second to no other. With virtual and live casinos becoming more and more popular, it comes as no surprise that slot machines and games of BINGO have entered the world of cell phone gaming. A fairly new app game, Free Bingo Casino – Bingo Dab has become popular rather quickly against BINGO fans. The high quality graphics and interactive features make this app perfect for all ages!

Bingo Dab is a free app that features high definition graphics, several bingo games, and an interactive interface. Players no longer just sit back and hope their number or letter gets called. Instead, they focus on skill and intuition to choose wait for one of their needed numbers to appear on the screen. Once it appears players must quickly DAB their card to mark that number. Players earn extra points and prizes for their accuracy, and their speed. After downloading and installing Bingo Dab for free on your android device, players are taken to a login screen where they can choose to create an account or play as a guest. From there, players get a basic run down of how the game works and what the rules are.

The game is color coded and vibrant, making it easy to read and appealing to the eye. On the left side of the screen are numbers that have been previously called; they are color-coded.  On the top center of the screen is your meter. This meter tells you when you are getting close to BINGO. When you have reached a BINGO, the big circle at the top will blink “CLAIM” and the player has to hit the CLAIM button in order to receive their prize. The right side of the screen will display any bonus prizes won during the game. The home screen tells you what level you are on and how many coins you currently have. There will also be two columns of four games for players to choose from. Once a game is selected, players are taken to the rules and then will hit play and the game will begin. 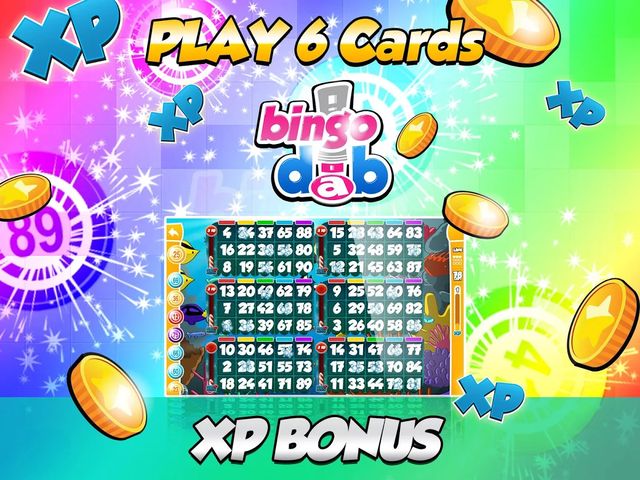 Once the game starts, players are shown a minimum of four bingo boxes. That means there are four separate bingo cards to keep an eye on. When numbers are called, they will appear on the left side of the screen and are color coded to match the different rows on the cards. The color of the ball tells you what column you should be looking at to find that specific number. Basically, if the ball is red, you look in the red column; blue ball means blue column and so on.

If you spot a matching number in a matching color column, you DAB it. The faster you DAB the number, the more points you earn. Players get roughly 3-5 seconds to find a matching number.  Once a row is completed, the bar on the top of the screen will blink CLAIM. Players can either DAB that button to earn their prize, or they can ignore it and continue playing in hopes of matching a second column for double the money.

The settings can be accessed by clicking the button located in the top left corner of the home screen and are easy to use. Although there is not too much located under settings, there is enough to make it customizable for each user. Players have the option to turn off the background music, sound effects, and the caller sound. The top of the settings screen also displayers the player’s name, how many XP they have earned, what level they are at, and their profile picture if they choose to add one! There is also a Help/FAQ button located under the settings tab, which is great for those who are new to the game.

Unlike most BINGO apps, this one is extremely interactive. Players do not just stare at a black and white screen hoping their number will be called. They get to choose the format they want to play in, stare at least four BINGO cards, pay attention to the numbers as they are called and make sure they DAB their numbers in time. Players also have to hit the CLAIM button if they want to earn their prize. As the game progresses, players will earn XP points, which will allow them to level up over time and earn larger cash prizes. Anther unique aspect to this game is the amount of detail that went into the design. There is so much color to the background graphics and each game has its own scenery.

Finding a con to this game was rather difficult. However, the settings could offer some more options. Perhaps a time limit option for how long a player has to DAB their corresponding numbers. Three seconds seems ideal for the average adult, but some people playing this game are much younger or much older and do not have eyes that work that quickly!

Bingo Dab is a unique and interactive BINGO app that really captures its players. The addiction factor is there and players are guaranteed to get a kick out of the caller voices and stereotypical BINGO music! The graphics are impressive and clear with the color-coding system being top of the line.

Press Your Luck with Bingo Bash

Dan RubinAndroid Apps
Bingo Bash is a unique android app game that is popular the world over. It enables users to join millions …
END_OF_DOCUMENT_TOKEN_TO_BE_REPLACED

Tracy DaviesAndroid Apps, iPhone Apps
You can forget to take anything with you on a trip: from a bank card to socks. But you definitely …
END_OF_DOCUMENT_TOKEN_TO_BE_REPLACED

Dan RubinAndroid Apps
There are many ways in which children get to learn. However, learning is better and children get to understand more …
END_OF_DOCUMENT_TOKEN_TO_BE_REPLACED

Dan RubinAndroid Apps, iPad Apps, iPhone Apps, Windows Apps
Life in today’s world is pretty busy. While the use of technology is apparently supposed to make things easier, in …
END_OF_DOCUMENT_TOKEN_TO_BE_REPLACED