This puzzle game was excellently and uniquely designed for three categories of people namely: Children, Teenagers, and Adults. No matter your age, gender, academic qualification, social status, race, religion, creed and what have you Digital Crack has something great in stock for you, what you need to enjoy this game is an android device with a little spare memory space for games and applications and as applicable in other things in life you also need to have a passion for games generally and puzzle games in particular.

It is however honestly observed that the interface used by the developers still makes it more of a teenager game than an adult game, the game would also be so much better if there were options for multiplayer mode which affords players to compete with their online friends. It is hoped that newer and upcoming versions of the game would take that into cognizance and do the needful. Now let us take a look at some salient features of this unique game.

Free to play: Perhaps the originator of the saying that the “best things in life are free” has this game in mind when he came up with that saying, one of the most outstanding features of this game is that it is completely free, you do not need to have mobile data enabled on your phone, neither do you need to have Wi-Fi of mi-fi access on your phone or tablet before you enjoy this game. To cap it all there is no pop up advertisement neither is there no hidden charges just download the game, install it and enjoy.

Compatibility: whether you are a rich executive in a blue chip company and in possession of high end sophisticated android phone or just a modest high school graduate with a modest low budget android phone you are not hindered in any way from enjoying this game as it is compatible and runs well on any android device whether mobile phone or tablet. 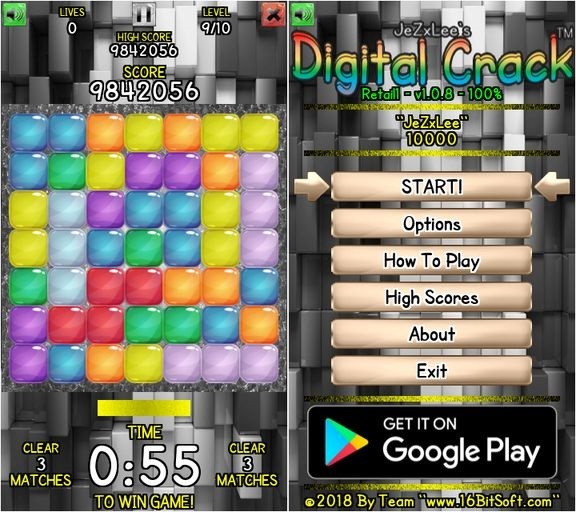 Graphics: Considering the size and simplicity of this game one would initially expect a low graphics game with unwelcoming and boring interface but you have to give it to the developers they were able to develop and come up with a beautiful Full Color and high resolution visual graphics that is appealing to the eyes and maybe to the heart too.

Sound effect: The game’s sound effect is digital and multi-channel, this is also enhanced by brilliant and amazing digital music soundtrack to really enjoy its sound effect at optimal level just plug in your ear-phone and get engrossed in a world of puzzle gaming.

Gameplay: As earlier discussed the game has three modes of Child, Teenager, and Adult it lists high scores in each category in a table format this allows you to clearly see your scores and compete with your friends in score ranks. As soon as you click on the start button, what you see is a picture of the earth in space with other tiny stars, you then proceed to the game proper which is an arrangement of square boxes of different colors. Digital Crack is played by selecting three bricks of the same color arranged in vertical or horizontal order, one has to be time conscious as you only have one minute to select all the bricks but the time will freeze as you get your brick selection right. The game runs smoothly with each touch being responsive to its touch Inputs and controls.

Saved games option: The saved game option is completely configurable meaning that gamers can configure how they want their games saved.

pickWEB for Android – Information on Your Hand

Dan RubinAndroid Apps
Are you tired of browsing through umpteen websites before you find the exact information you are looking for? Is your …
END_OF_DOCUMENT_TOKEN_TO_BE_REPLACED

Dan RubinAndroid Apps
Creativity and music have always been a wonderful combination to witness. With the introduction of Guitarcraft, the developers have tried …
END_OF_DOCUMENT_TOKEN_TO_BE_REPLACED
1