With so much automation in our lives, it’s a wonder that we are able to remember anything anymore. Think about how many phone numbers you can remember now. A decade ago you probably had ten numbers memorized, ready to be dialed. Now, you’re lucky if you can remember your own cell number.

Things may not be that bad, actually, but it is a fact that we are using our brains for certain activities much less often than before. This can lead to deterioration – also known as “use it or lose it.”

If you are looking for a fun way to use your noggin, then download dispair today. It’s a neat brainteaser game that forces you to focus and activate brain connections to get the right answer.

The game itself has you look at a bunch of letters, and then place them in the correct order.

The app challenges players with increasingly difficult puzzles to solve. The complexity behind them is such that the play levels don’t even start at 1, they start at level 4 and make their way up to level 8: 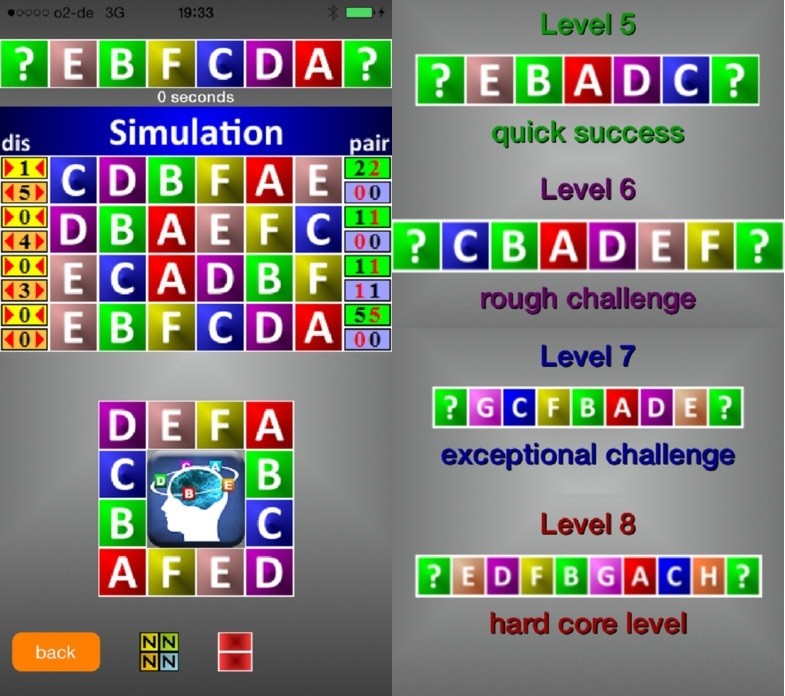 You can also play in two different modes. Beginner’s Mode allows you trial play and lets you make several attempts at your answer, allowing you to learn the game and how it works. It also allows you to figure out quickly just what the game is looking for in terms of an answer. The combinations are many, so practicing in this mode is crucial.

Professional Mode is the serious side of the game. Here, you are challenged and afforded little leeway when mistakes are made. This allows you to turn on the heat and see how your deductive talents work.

I initially found dispair a bit despairing. It was hard trying to figure out what the right combination was and I came across several fails. However, each fail was really a learning moment that allowed me to collect data and learn how to play better.

I would say that having a Level 1, 2, and 3 would help players feel less anxious about playing this game, because as it stands right now, it’s a bit daunting to think of playing at Level 4 straightaway.

Nevertheless, once you start playing dispair you easily get hooked onto it, especially if you are the combinatorial mathematical type.

TSC Music – Improve Your Listening Experience While Protecting Your Ears

Dan RubiniPhone Apps
Our sense of hearing is precious, and so is the equipment that allows us to hear. Protecting what’s in our …
END_OF_DOCUMENT_TOKEN_TO_BE_REPLACED

Top-rated Self-learning App for Your Kid in 2022 – LogicLike: Games for Kids

Michael WalshiPad Apps
Not all screen time is negative. Experts agree that learning apps for kids can be fun, engaging, and interactive. They …
END_OF_DOCUMENT_TOKEN_TO_BE_REPLACED

Manage Your Work Files with Notebooks

Dan RubiniPad Apps
One of the best iPad apps for writing and editing data and doing your office work is Notebooks. This app …
END_OF_DOCUMENT_TOKEN_TO_BE_REPLACED

Penquills – Script Recognition Converts and Captures Notes from All Sources

Dan RubiniPad Apps
Handwriting recognition is not something that you think about on a daily basis, but if you are hooked to your …
END_OF_DOCUMENT_TOKEN_TO_BE_REPLACED