Most gamers think, solitaire is solitaire, it’s so boring. How can you make it more exciting. Well, TriPeaks Solitaire takes a new look at solitaire and turns it into a new kind of game, with more highs and lows than the typical card game.

A free download, TriPeaks deals the cards out a little differently. 18 downturned cards are placed out in the shape of three connected peaks. Simultaneously, 10 cards are placed face up under the peaks, as mountain filler. Next, one upturned card is placed on the discard pile, which is located at the bottom of the screen, and the remaining cards are then overturned and placed as the stockpile just left of the discard pile. Clicking on a card on the peak can move it to the discard pile, provided it follows in sequence, up or down.

As is the case in any solitaire game, clicking on the stockpile reveals a new card you can play with. Different games reveal new challenges that can earn you more points and more advantages in game play, so you can win more. One example is the timer freeze function, that lets you stop the clock so you have a better finishing time overall. But it’s important to remember to learn to play fast, as finishing before time is up, and possibly in record time, gets you even more points. 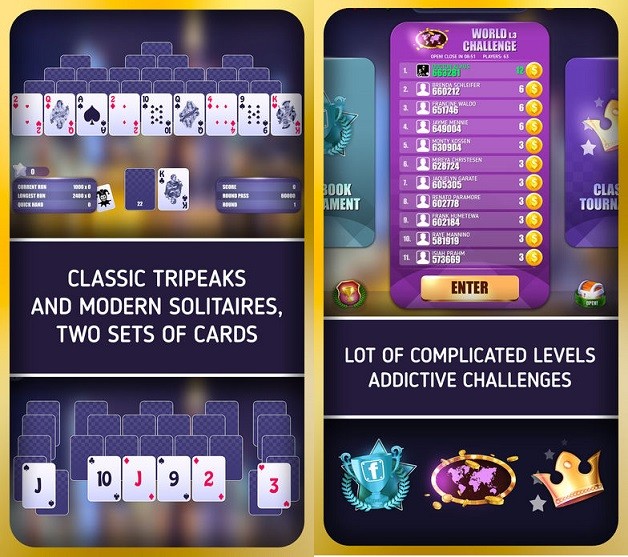 While solitaire is traditionally a game played by yourself, there is no reason why you can make it a challenge against fellow solitaire players. TriPeaks brings in friends through Facebook, if you so choose. All you have to do is connect with your Facebook friends and you’ve got challengers waiting for your next move. You can all play and get ranked, so you can work not only against the cards, but against friends, as well.

The graphics and background kind of give the player a sense of being in Vegas, with deep colors like purple and black, further enhanced with crisp movement of objects. The background music also lends itself to enhancing the overall experience.

Most of the game is free, but it’s always nice to know that there are options to purchase the powerups and bonuses that can also be earned through games that you win or points you earn.

I would probably make some of the screens less ornate. I know that the creators were going for a lavish Vegas look, but it can get distracting at times and makes it a bit more difficult to get to the meat of the information.

Other than that, I found TriPeaks to be a great expansion to traditional solitaire type games, providing a new type of challenge to the card game arena. This app is also available for iPhones.

Who’s The Boss – New Job? Know What You’re Getting Into

Dan RubiniPhone Apps
Changing jobs these days is considered the norm, but consider the old saying that “the grass is always greener” elsewhere. …
END_OF_DOCUMENT_TOKEN_TO_BE_REPLACED

Dan RubiniPhone Apps
Dogs are a man’s best friend. So many households own a dog, or even more than one. I love dogs, …
END_OF_DOCUMENT_TOKEN_TO_BE_REPLACED
2

Dan RubinAndroid Apps
Have you been trying really hard to lose weight while spending money on expert advice and not been successful? Have …
END_OF_DOCUMENT_TOKEN_TO_BE_REPLACED