Looking for a simple game that echoes gameplay of yesteryear? Bomb Survivor is one of those games that has you running across the field, always in one direction, looking for rescue at the chopper that is waiting. The scene: a battlefield covered with minefields underfoot and a swarm of bombers overhead, looking to target and destroy. Your mission: survival. Your plan: dodge the bombs and jump over mines. Sound simple, but it grows more complex as you master the levels and collect coins.

This app is very primitive indeed when you first download it. Upon initial play you’ll wonder what you got into. The age group is really for kids, but if you like this type of game, where you tap to move, it can be a real pleaser. There are several levels to play, and according to the creator, there are more to come. As you pass levels, you attain more points, and this can add to the challenge and complexity. The game is inherently very simple throughout, but who doesn’t need a little simplicity now and again. Sometimes, it’s just fun to win, and this game can provide that instant gratification.

This game initially starts with a screen that shows a simple battlefield, a soldier and four arrows. The soldier is shown running towards the left of the screen, towards the chopper that can fly him to safety. As he runs he must move forward and back to avoid bombs that fall from the sky from planes flying overhead. Use the two bottom arrows to move the soldier and avoid bombs. You can get hit a few times before you are completely out of the game. Once you are out, you can go back in and continue play at the same level until you succeed, at which point you collect a sum of coins and move on to the next level.

Challenges are minimal, and increase as you move through levels. You can change out the type of player via uniform selection. You can either earn this selection or purchase it in-app through coins or money. As you survive more levels, you bank more health as well, which allows you to sustain more “hits” from bombs, and helps you get through the tougher levels. Surprise levels that include a rain of coins are the fun ones and mean bonus points galore. Rack up your stores and move on with more options and strength. 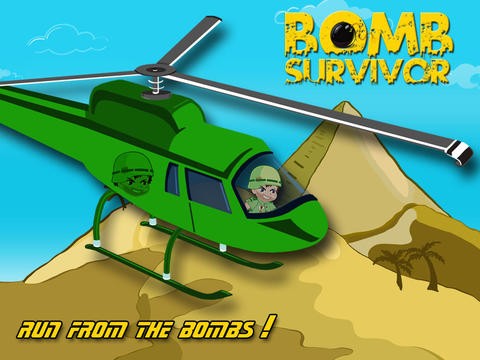 The only thing about this game that I was not very excited about was the pace at which the soldier ran in the initial level. It was very fast and it was not apparent to me that the arrows at the bottom of the screen were how you moved him to avoid the bombs. For about three to four trials, I sat tapping the screen in random spots hoping my guys would move, but to no avail. He stood still and was pummeled with explosives! I finally took note of the arrows and realized that those were my controllers. Some better Help would be nice.

However, overall, this game can be entertaining once you understand how it works, practice it a bit and get a feel for how it plays out. Bomb Survivor really is a very simple game to play and keep one busy for a bit, when needed.

Dan RubiniPhone Apps
With our lives so closely linked to devices and connectivity through computers, it is becoming increasingly important to be able …
END_OF_DOCUMENT_TOKEN_TO_BE_REPLACED

Turn Your Smartphone into a Powerful, High-quality Scanning Device with MT PDF Scanner

Tracy DaviesAndroid Apps, iPhone Apps
There were days when people used to seek the help of different types of scanners to scan photos, documents, receipts, …
END_OF_DOCUMENT_TOKEN_TO_BE_REPLACED

Dan RubiniPhone Apps
Love your music selection on Apple Music but wish you could get more out of your library? You need to …
END_OF_DOCUMENT_TOKEN_TO_BE_REPLACED

Dan RubiniPhone Apps
The internet can be a scary place. Not because of what you might see or get exposed to, but because …
END_OF_DOCUMENT_TOKEN_TO_BE_REPLACED
2