muvee Action Studio Video Editor Pro is one feature filled app that is surprisingly available for free on the Google Play Store. This app is so feature filled to the extent that it will take some getting used to before users can learn to use all of them. The paid version goes a step further and adds even more features to the already full list of features that come with the free version. Let’s dive in and see what Action Studio Video Editor Pro brings to the table.

One look at the app’s user interface (and the app’s size) will tell you that the app seeks to achieve one thing: to make the complex video editing tasks possible on mobile devices. That said, you will need a very powerful android device before you can make the most out of most of the tough features that come with this device. To avoid disappointments, it’s therefore important to first invest in a powerful android phone or tablet before investing in this app. That said, when used on the right device this app is one of its kind. It gives users virtually everything they would need to do video editing on mobile devices. The main highlight of this app is the way it’s possible to bring out amazing videos – videos that will amaze just about everybody – from small mobile devices.

Just like the name suggests, this app brings a studio to your android device. A studio is an artist’s workshop so you can be sure that whatever comes out of this app is art in its pure form. To use the app you will first need a supported android device. This is one place where many users will go wrong because with rooted devices, everyone can install an app in almost any device regardless of whether the Play Store thinks that the device can handle the app or not. 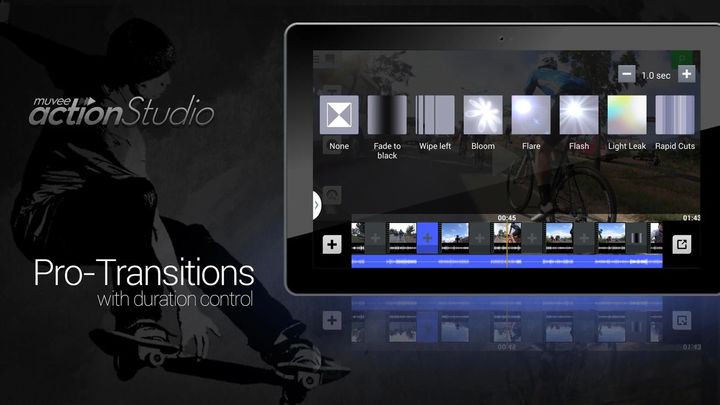 Like I mentioned earlier, this app is very demanding performance wise hence it’s critical to ensure that you install it in a device that’s well endowed. You can choose to go straight into the paid version or you can go with the free version first to check if it’s a viable investment. Nonetheless, you can be sure that if you do your homework when it comes to choosing the device, you’ll get the paid version almost immediately after trying the free version. After downloading and installing Action Studio Video Editor Pro, you are good to go. The next step is to enjoy the app. Take a video, add cool transitions, overlays, crop it to narrow down on the action and add music to it. These are just a few of the things you can do with Action Studio Video Editor Pro. Like I said, this app is fit to be called a fully-fledged studio so you can be sure that the possibilities are endless.

A quick look at the other apps with similar capabilities will tell you that this app is one of its kind. The most outstanding thing about muvee Action Studio Video Editor Pro is the amazing and time saving “ActionStudio” style. This feature enables you to save time and at the same time come up with an output that stands out. Here, everything is done for you and your only job will be to provide the videos.

Needless to say, this app is very demanding performance wise. It only works well in top end devices. When tried on smaller devices, the results will be catastrophic. It’s therefore a good idea if the developers would come up with a smaller version of the app for the common-man android device. That aside, this app brings out-of-the-world video editing capabilities to the android world.

NetworkToolbox – Easy to Use Network Security and Management

Dan RubiniPhone Apps
Network security is vital to the safety of your family and business. If you run networks internal to your home …
END_OF_DOCUMENT_TOKEN_TO_BE_REPLACED

Fly Like an Eagle, Explore, and Experience Flight through Eaglivion VR

Dan RubinAndroid Apps
If you feel the need to escape to another world at some point in the day, why not try the …
END_OF_DOCUMENT_TOKEN_TO_BE_REPLACED

Dan RubinAndroid Apps
Calling all casual gamers! This is an app that won’t demand any of your precious time, but will fill up …
END_OF_DOCUMENT_TOKEN_TO_BE_REPLACED