If you are a fan of Super Panda and his crazy adventures, then you will instantaneously fall in love with Animal Friends Adventure. The creators of Super Panda Adventures have given Super Panda some allies and introduced a new set of escapades for kids of all ages to enjoy!

A free download, the app is full of a variety of challenges and puzzles to solve. The app takes it even further with 3D side scrolling motion, that takes you through different places that each have their own obstacles to overcome.  Players will have to navigate through deserts, forests, caves and more to

Super Panda has returned for an all new and incredible Adventure. This time he brought friends. Join Super Panda and Friends on a wild and fun 3D side scrolling journey through forests, deserts, caves, lava and more! Each place has its own foe to fight: there are Golems roaming the forests, hiding behind trees and under leaves, along with pixies, crazy mushrooms, hornets, praying mantis and huge lady bugs. 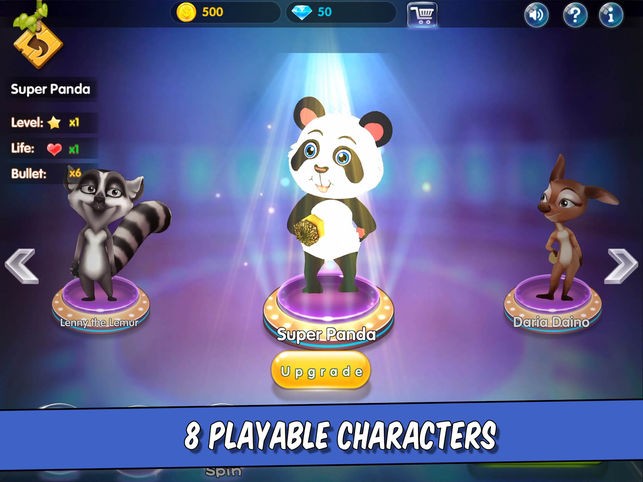 But don’t worry, because as a player, you have Super Panda and friends to battle them and the bosses. There are eight characters to play and each has its own unique battling skill: Panda has acorns that he tosses and pop near monsters to take them out. Deer creates magical hearts from Love bombs. Bear can crush enemies with a giant weight, that also opens secret doors. Gorilla’s got giant boulders to toss that can break down iron barriers and crush opponents. Fox is tricky, as are all foxes. He can toss a classic cartoon bomb that complete clears the space around it but be aware that it can also harm Panda and friends, as well, not just the enemy. The Lemur can ward off the monsters from the ground with a spiky ball that he crafts and tosses. Rabbit is the smart one. He throws spiked spinners that speed across the forest floor, creating chaos in its wake, along with a ton of laughs. And of course, there is Super Panda who drops fart bombs that not only create hysterics amongst players but takes out monsters, too.

What I like about the game was there were no ads. Yup, that’s the truth. The game also has a variety of fun pets that help each animal do its job and helps you earn extra points and become stronger. You will find these pets in various worlds that you move through You are on an adventure around the world, and in order to make to all of the places you wish to explore, you must do your part to battle monsters and bosses using each of the special gifts given to the eight animals.

In all the game is fun for anyone looking to play something different. The controls are fairly easy but take some time to get used to, so you don’t make your animal jump too high or duck too low. It also takes some practice to move your playing character at the right speed and move him through the game.

I recommend Animal Friends Adventure for anyone looking for a decent game for their kids or for anyone who’s a kid at heart. Tons of fun and a barrel of laughs.

Dan RubiniPhone Apps
You hear about its benefits but struggle to fit it into your busy schedule – it’s meditation, and it’s undergone …
END_OF_DOCUMENT_TOKEN_TO_BE_REPLACED

SmartSex – How to be Smarter and Respect Sex

Dan RubiniPhone Apps
Often a taboo topic, sex is the topic of concern for parents, the topic of interest for adults, and a …
END_OF_DOCUMENT_TOKEN_TO_BE_REPLACED

Creators of MacX DVD and VideoProc Make the Holidays Merrier

Dan RubiniPhone Apps
If you’ve been toying with the idea of purchasing a copy of MacXDVD, waste no more time. Digiarty has holiday …
END_OF_DOCUMENT_TOKEN_TO_BE_REPLACED

Dan RubiniPhone Apps
Immerse your young reader in an adventure that, yes, involves a computer, but sends them soaring on a quest that …
END_OF_DOCUMENT_TOKEN_TO_BE_REPLACED
1