While most block blasting games involve tapping on an accumulation of blocks of the same color or category, Diamond Brickout takes that game to a different level. Popular as a desktop app, it’s now mobile, thanks to its creators, who have packaged it up nice and neat so you can take it on the go.

To start, graphics are vivid and bright, with a ton of color and movement. Free to download, when you first open the game, you’ll see that you have four worlds within which to play. The first one is open as a default. You have to, as is always the case, work your way up to the other worlds by mastering each level put before you.

Within each world there are levels. Again, they are all locked until you complete the one you are assigned to. When you are ready to play, the app will guide you through a tutorial so you can get an idea of how to blast the blocks. Basically, you will have a bouncing ball that changes color. On the screen you’ll see grouping of different colored blocks that need to be blasted. When the ball is green, you will be able to blast green blocks. When the ball is blue, you will be able to blast blue blocks. To move the ball around, you tap and hold on the left side of the screen to angle it left bound and the same goes for the right. The bouncing action is already there. 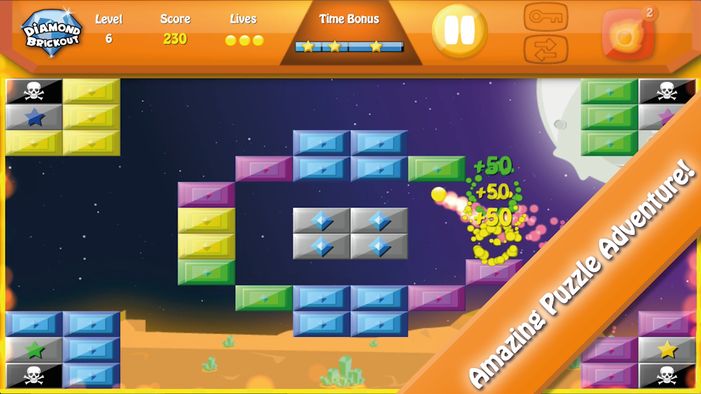 The key to earning points is aiming the bouncing ball to hit what you need it to hit and not hit what it’s not supposed to. There are block on the screen with skulls on them. Hit one of those and you lose points that are kept in the form of stars. Now, if you are worried about the controls, don’t be. The app will have you practice the actions of tapping and holding so you can angle the bounces and move the ball around. It may take some time to get the hang of it, and the practice helps you know what you’re getting into.

If you really get into it and want to see how you compare against the player community, sign into Game Center to see how you stack up on the Leaderboard. Diamonds are what you are looking for, along with lives. Your Diamond and Heart counts can be found on the main screen/dashboard. Diamond Brickout is also Cloud accessible, so you can pick up where you left off even if you are playing from a different device.

I’m not sure there’s anything the developers could do to improve on this game. It’s fun as is and has no quirks. I do look forward to Multiplayer and connectivity to the Community, which were both faded out options at the time I downloaded the game, so I assume they are in the works.

As it stands, Diamond Brickout is a fun game for all that you can download for yourself or for your kids. Everyone will have fun playing and you’ll get to test out your brick blasting technique wherever you are.

Dan RubiniPhone Apps
If you love letters and you love making words, then there’s a new game you need to try out. Sort …
END_OF_DOCUMENT_TOKEN_TO_BE_REPLACED

Dan RubiniPhone Apps
Looking for a way to instantly record yourself and share it with the world? Many love the instant gratification that …
END_OF_DOCUMENT_TOKEN_TO_BE_REPLACED

Debby App Monitors and Manages Your Money the Easy Way

Blockchain for Boards Could be a Game Changer

Dan RubiniPhone Apps
You may have heard of cryptocurrencies like Bitcoin and Ethereum, which were conceived in 2009 and 2013 respectively, and have …
END_OF_DOCUMENT_TOKEN_TO_BE_REPLACED