Gamers love a challenge – always. Some gamers go for speed to test their reflexes, other gamers like a game with more depth and complexity, to test their minds. Most strategic based games can be puzzle based, games of chess, or they could be ones that are based on war tactics.

WarSmoke takes a little from multiple types of games and brings it all together in a world war type of game in which the player gets to choose generals and moves that his troops will make to defend or overtake cities or to rescue prisoners from the enemy.

WarSmoke bases its background in post World War I. I have not been able to determine if it takes place during World War II or before that, but in any case, the app opens up to a quick tutorial that explains what has happened so you have context on where you are when the game actually starts. 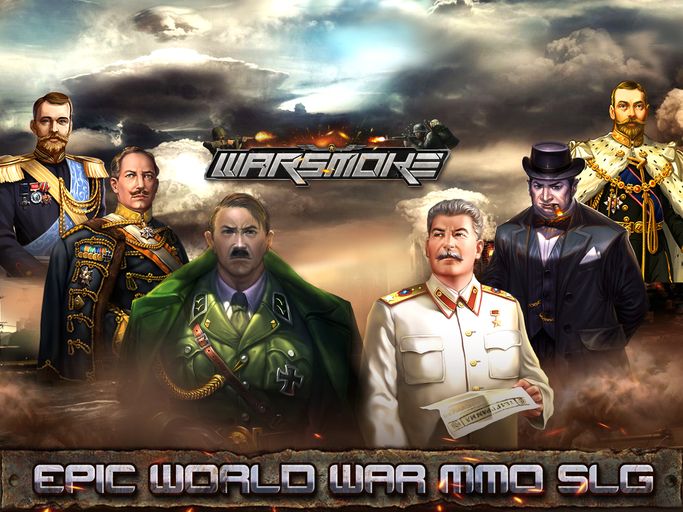 You simply tap through the screens and follow the prompts to the game. Then when the game actually starts, the app prompts you through the taps and clicks you need to make to set things up. This includes the city you wish to base your game out of, the general you want in command and so forth.

Once these options are chosen, you are taken to the city and your next mission. It could be to take over the city and gain possession of the resources embedded within, or it could be to venture to a dark hidden locale in which several of your troop has been held captive.

The cities and areas to capture appear on a grid. Each block designates an area that, if red, is held by the enemy. Once you secure ownership of an area or block, that block becomes green.

Whatever the case may be, as you capture and collect more, you increase your powers and your choices. This include generals and armaments. As you progress through the game, you will see the battles increase in complexity, requiring more thought behind who you want to have in the leadership position and what offensive and defensive mechanisms you will choose.

I have to say that once all the prompts stopped and the actual enemy was on my doorstep, I fell apart. I was not sure how I was supposed to fire at them from my tanks. So, I started tapping away near and on top of the enemy and from my own tank until I finally destroyed them. This earned me a victory and I gained ownership of the city.

Once receiving ownership, the app showed me exactly what I earned: some logs, some iron and a few other things. It was interesting. I would say the graphics are somewhat realistic, but can use some improvements.

What I really liked was the prompts and cues on what needs to be done next. This is a huge plus for newcomers to the game.

If you are looking to test your skill on the battlefield, download WarSmoke today!

Dan RubiniPhone Apps
Exercise is essential to keeping well, but sometimes we can get bored with the workouts we do. It’s so important …
END_OF_DOCUMENT_TOKEN_TO_BE_REPLACED

Tracy DaviesAndroid Apps
Modern organizations are highly complex and overburdened by performing several activities. To do the tasks efficiently the manager has to …
END_OF_DOCUMENT_TOKEN_TO_BE_REPLACED

Dan RubinAndroid Apps
You may have thought the days of playing games on your phone were over. We all remember trying to beat …
END_OF_DOCUMENT_TOKEN_TO_BE_REPLACED
1