Run the Ruins of an Aztec Temple to Stop the Apocalypse

Adventures come in all shapes and sizes, in different places and with an assortment of challenges. Most games have you cramping fingers until numbness sets in. Not so with most running games. Yeah, those are the ones where you simply tap or swipe to make your player move around to avoid a fallen tree, a stone column or jump over a stream to avoid being swept away. If Temple Run is coming to mind, then you know all too well the adventures, the twists and the turns, and you may be thinking, how could a game like that get any better? Well, put it in a different time and place, give your runners a new face and you’ve turned a race into a mission to save the world. The Aztec world, that is.

Spirit Run is a game from the makers of Zombie Run HD, namely, RetroStyle Games. They seem to have a pattern going on, but they wear it well. They have taken the basics of running through mazes, avoiding mishaps and collecting powerful life-restoring gems and made it a new challenge and immersing the run in an ancient time and place. They have also added the element of spiritual transformations so that your runner, who is human, can swap his soul for a bit of time into his animal counterpart.

Animal counterparts take one from being an Aztec into becoming a Panda, a Fox, a Bear, a Panther or a Wolf. Each runner, of which there are five, has its own animal counterpart. Of the five runners, one is for free and comes with the basic downloaded game. Opt for any of the other four by making either an in-app purchase or shelling out some gems that you’ve collected. 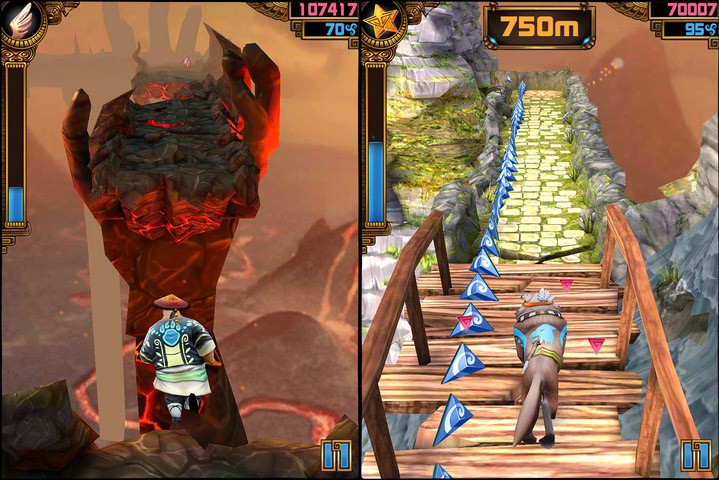 The game basically takes you from very simple and elementary levels to help you learn the foundational movements to maneuver your runner across bridges, over gaps in the path, under fallen trees and make quick turns. The initial levels keep the speed of the runner at a pace that allows for learning without getting turned off to the game. There are even opportunities to find and earn gems, which sometimes is unheard of in tutorials.

The end goal is to prevent the imminent apocalypse which will destroy your temple and your people. You, as the runner, must make it to the finish line to save a civilization; and it’s not an easy feat. The preliminary levels help you gain skills and confidence, but higher level challenges await as you move up the ranks and the ladder of levels. When faced with danger, you can morph your runner into his animal self and defeat the oncoming antagonist. Get past these roadblocks and move forward to collect more gems, more life, more strength, and move on.

While fun to play and fairly easy to learn, it would be nice to have some sort of help button to give you a context of what it is you are heading for. Just running can get boring and you sometimes end up stopping and wondering where you really are headed, in terms of game play. Yet, for a game that is free, at least for now, Spirit Run is a fun take on a game that so many app players know too well, and brings fresh perspective on it. For those that are experts, this will be an easy game to master.

Trail the tail – Fun App Where Kids Follow, Find and Learn About Animals

Dan RubiniPad Apps
Kids love to learn and explore, but don’t always have the opportunity to experience firsthand different places and things. When …
END_OF_DOCUMENT_TOKEN_TO_BE_REPLACED

Dan RubiniPhone Apps
Dogs are a man’s best friend. So many households own a dog, or even more than one. I love dogs, …
END_OF_DOCUMENT_TOKEN_TO_BE_REPLACED
2

Capture Every Color on the Go with Expert Help – ColorQueryPro app

Dan RubiniPhone Apps
In the next installment offered to fans of Fairlady Media, find yourself filling up buckets of fun Fishing with Grandpa. …
END_OF_DOCUMENT_TOKEN_TO_BE_REPLACED