For those familiar with Shadow Fight, its creative makers Nekki have come up with a sequel to keep players in fight mode and battling with finesse. Shadow Fight 2 was released about a month ago and is currently available for download on the iPhone, iPad, and iPod Touch, with optimizations for iPhone 5.

This app has enjoyed enormous success since its launch in June, offering players a continuation of story and epic combat of its predecessor with more Kung Fu and fighting matches rendered in super-quality graphics. Attack animation is carefully crafted, immersing players into a virtual reality like no other. While not as challenging or fast-paced as Mortal Kombat, it offers players a unique chance to be more calculating in their moves and more deliberate in their counter-attacks.

During combat, you strike your opponent, or attacker, in certain parts of the anatomy. Successful hits win you points. Hit boxes are strategically defined and outline key targets that buy you maximum reward. For instance, a hit box on a particular portion of the attacker’s head will get you far more points than on just some random area. It takes a few shots and games to uncover where those boxes are, but once you have revealed them, you slowly grow to master the game – and become the master.

Combat is usually one-on-one. The app offers a basic set of weaponry to arm your fighter, with options of heroic swords, nunchacku, armor suits, and more. As your game progresses, you are offered more options in artillery and armaments, including ranged and melee weapons, armor, and even a bit a magic thrown in. You become a wizard of sorts wielding weapons and spells to boot. 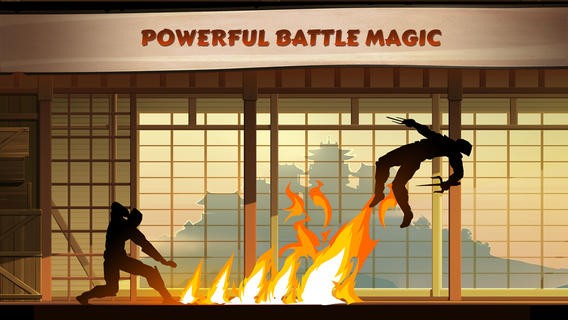 Combat sequences are skillfully designed and artfully played out. Details and corresponding animations are lifelike and engaging. Fighting controls are more intuitive and increasingly receptive, made specifically for touch screens. The hero must attempt to successfully traverse through six different worlds, coming out alive and on top at the end to close the Gate of Shadows. Graphics are apt and entertaining. Fighters are rendered in silhouette fashion, giving a cinematic and dramatic effect. It’s as if you are making a movie while you make the moves.

The only small catches to this gaming app are limits to game play. Embedded in the app is an energy tracking system that shuts down game play once you hit your limit. Getting around this requires an in-app purchase to upgrade to premium settings. Controls that are direly needed to play this game can also be tricky to download, but are wise to have if you wish to play at an effective level. A little bit of patience along with some trial and error will get you to your goal and you will be off and playing.

Regardless of these small snafus, Shadow Fight 2 provides a great deal of entertainment, especially if you’ve extracted the maximum from part one and are looking for more. It also helps that it’s offered for free.

Dan RubinAndroid Apps
Finding mates is almost always hindered by conflicting interests. This is one thing that many social apps have never understood. …
END_OF_DOCUMENT_TOKEN_TO_BE_REPLACED

Dan RubiniPhone Apps
zeZebra is a new app that allows users to send and receive files over a peer to peer network. The …
END_OF_DOCUMENT_TOKEN_TO_BE_REPLACED

Dan RubiniPhone Apps
A simple game, Super Space Boy is an adventure for kids and adults alike, set in space and fun for …
END_OF_DOCUMENT_TOKEN_TO_BE_REPLACED

Dan RubiniPhone Apps
While most block blasting games involve tapping on an accumulation of blocks of the same color or category, Diamond Brickout …
END_OF_DOCUMENT_TOKEN_TO_BE_REPLACED