Solo Launcher is one app that amazes many people because of the plenty of available features that are normally available for a premium on other launchers. This means that if you are looking to get it all while at the same time saving some money, then this is the app for you. It in a way sounds like having your cake and eating it. Let’s dig deep and try to see is this app is a fair bet.

Just like the name suggests, this app is a launcher. If you are new to android devices, or if you have not been doing a lot of app shopping in the past decade, a launcher seeks to make your phone look more appealing to you by modifying the default user interface that you get in your home screen, app drawer and sometimes even the messaging app gets a little tweaking. These apps empower android users because they are able to remove any element of their phone’s user interface that they may not like.

Now back to Solo Launcher. This launcher has been made to ensure that everybody with a supported android device gets access to a smooth and free solution to any display flaws that may come with their devices. It adds plenty of transition and scroll effects to otherwise plain tasks. With this app, users will be happy to show off cool effects on their phones.

Just like any other android app on the play store, you need to make sure that you have a supported android device before you can try and install Solo Launcher. Unfortunately, users who are running versions of android below Ice Cream Sandwich (Android 4.0) will not be able to use Solo Launcher.

Once you have verified that your phone is supported, you can go ahead and install. Installation is plain and simple just like you would do on any other android app on the Google Play Store. After installation, the next step is setting this app as the default launcher to ensure that you don’t get a pop-up every time you tap your home button. From there, what’s left is only sitting back and enjoying the many amazing effects! 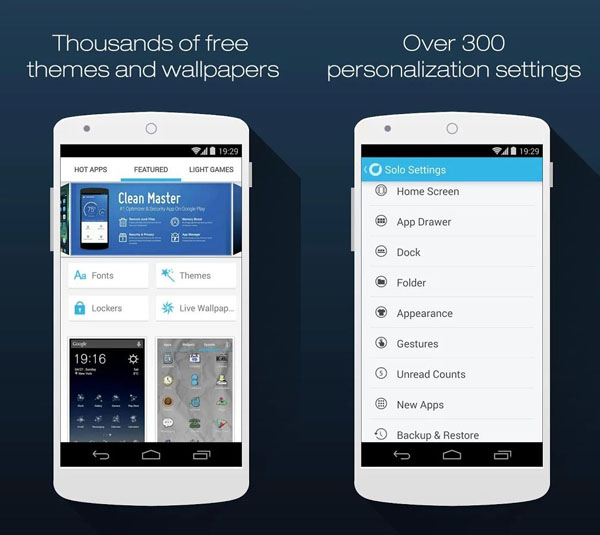 The most impressive thing about this app is the emphasis placed on the privacy. The developers even went a step further to explain all the permissions that you give the app. When compared to many other android launchers available on the market, we can confidently conclude that the developers of Solo Launcher did their homework. In addition to the fact that the launcher is free, users will also get to enjoy an ad-free experience on this app. This way, you’ll not see any distractions in form of the annoying pop-up ads that are there on most free apps.

The other unique thing is the customization. Solo Launcher goes a long way in ensuring that you have a wide range of options to choose from. From smart widgets all the way to hundreds (possibly thousands) of free themes and wallpapers, you can be sure that it will be a long time before you look for something “fresh”. It’s also very easy to use and unlike many other launchers, it has no problem integrating with Google Services, something that’s hard to live without in android devices.

The only con that we were able to pinpoint is that it’s not possible to set this launcher to be the default launcher in a number of phones. That aside, it’s a gem!

Dan RubinAndroid Apps
There are many ways in which children get to learn. However, learning is better and children get to understand more …
END_OF_DOCUMENT_TOKEN_TO_BE_REPLACED

Dan RubinAndroid Apps
Finding mates is almost always hindered by conflicting interests. This is one thing that many social apps have never understood. …
END_OF_DOCUMENT_TOKEN_TO_BE_REPLACED

Dan RubinAndroid Apps
What comes to your mind when you hear the words ‘Middle East’? It might be the exotic cuisine, or the …
END_OF_DOCUMENT_TOKEN_TO_BE_REPLACED