Based on a classic game of the 1990s called the Tetris Attack this game is a sure way to jog your memory and remind you of the ecstasy you experienced if you played it in the 90s and if you are just getting a taste of this game for the first time our honest review here will open your eyes to what to expect as you download and play the game and if you have played and enjoyed the game keep calm and wait for other reviews. Be a good citizen of planet earth by preventing meteorites from destroying the earth I can hear you asking yourself how do I that I do not work with NASA well by playing the game in the right way you can help us keep the earth safe from the meteorite as you soon as you lose in the game a lurking meteorite will hit the earth or should I say hit your phone. An attempt would be made to shed light on the salient features of the game below fasten your seat belt while you ride with us.

Gameplay: The game play is like your normal arcade classic game, as soon as you launch the game the android logo shows up followed by the name of the game developer which is 16bitsoft inc comes up after which the game is ready to be played. The game’s objective is to prevent pieces from reaching the top and this is done by rearranging the pieces either horizontally or vertically into a set of three or more you really have to time conscious while doing that the saying that time wait for no one is particularly relevant here and as the game proceeds new piece will come up.  The game comes with three different modes namely story, never ending, and time attack high scores are listed based on the game modes. 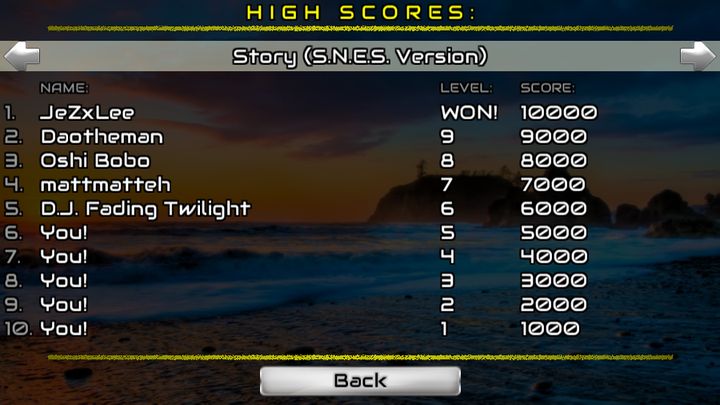 Free to play: one of the beauty of this game is its affordability all you need to enjoy it is an android mobile phone or tablet with a free memory space that is not above 30MB, there is no hidden charges either before or after download, it doesn’t bring out those annoying pop up advertisement, you need not connect to mobile data or Wi-Fi network before you enjoy it.

Compatibility: The game is compatible with every android device and operating system version from the first OS version to the one that would be developed next year.

Soundtrack: You have to acknowledge the developers here the sound track is simply on point, as soon as you launch the game your ears are treated to a nice music by soundtrack by “D.J. Fading Twilight” but I assure you the music won’t fade away from your memory in a jiffy.

Graphics: To be honest here there is nothing really spectacular about the graphics it is what you can expect from any tetris game especially when it is modelled after a version that came out in the 1990s. However, the aircraft that travels out of the planet earth when the game is started and the meteorite that would hit the earth when the game is over looks considerably nice the choice of colour used is averagely cool too. TetriAttack Armageddon‘s graphics will not be a hindrance to you having fun as you play the game.

Fortune City – Get Educated and Entertained

Dan RubinAndroid Apps, iPhone Apps
There is nothing compared to getting educated and entertained all together and at a glance, this gamified finance application seeks …
END_OF_DOCUMENT_TOKEN_TO_BE_REPLACED
1

Dan RubinAndroid Apps
We all need a little inspiration sometimes and when it comes to cooking it is no different. We scratch our …
END_OF_DOCUMENT_TOKEN_TO_BE_REPLACED

Stoned Puzzles the Sharpest of Minds

Dan RubinAndroid Apps
If you’re a person that’s always up for a challenge, then I challenge you to try the Stoned puzzle app …
END_OF_DOCUMENT_TOKEN_TO_BE_REPLACED

Michael WalshAndroid Apps
When you play a puzzle, not only do you find the answer but also develop life skills. Confused how? Playing …
END_OF_DOCUMENT_TOKEN_TO_BE_REPLACED