While its description makes it sound like a fairly simple game, it’s actually tougher than you think. Bing Bong is a ball catching game that simulates a simple arcade game where the ball bounces off “pins” and barriers that ricochet and propel the ball this way and that. The object of the game is to catch the green ball, while not catching the red ball. If you catch the red ball you are out.

The other catch to this game is that the ball itself can change size and bounce off random objects, making it a bit more difficult to predict where it will go next. The game gives you a rectangle shaped object that is green in the middle and white around. Your aim is to move that “basket” back and forth to find its way to a place where the eventual landing spot of the green ball ends up in the cup of your basket.

The basket is controlled by a bar that sits just below it. You have to keep your fingertip on that bar and slide is left to right or right to left, depending on where you think the green ball will end up. The very first falling ball is easy. Then, with every successive game, the app adds obstacles that move the ball off its trajectory. Things like white balls and white bars will show up, one at a time on each game. If you fail to catch the green ball or catch the red ball, it’s game over and you start again at that same level. 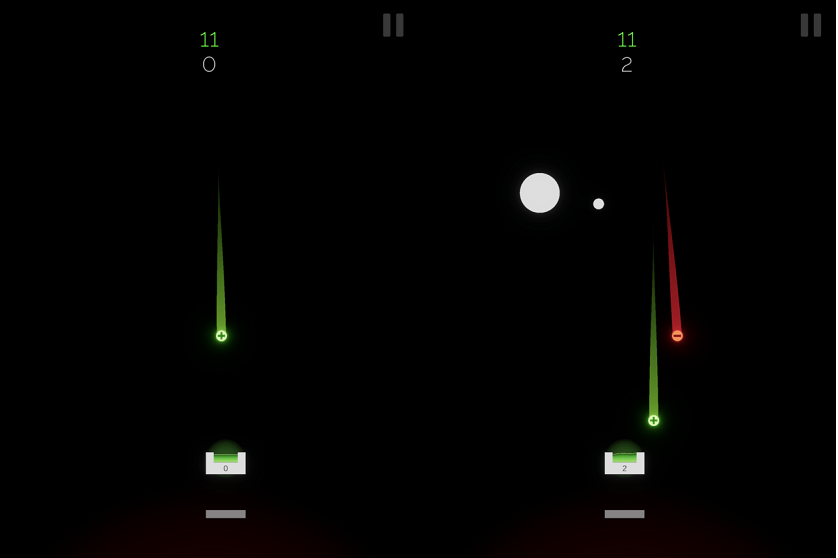 Sometimes the green ball grows in size when it hits the round white orbs or even when they hit one of the bars. The game changes things up quite a bit, so no two games are the same. As you progress, the speed of the balls slowly starts to increase, so you have to keep your eye open to the entire screen and not focus on just one ball. When the ball falls into the basket, it’s like it’s splashing into a pool of green liquid.

The game is fun to play, and it keeps you on your toes. If you are not into fast-paced quick reaction games, then Bing Bong might be a little frustrating, but if you play long enough, you will the hang of it.

I think it would be nice to change up coloring once in a while to spice things up a bit. As a game that keeps you challenged with a simple task of catching a ball that can get diverted in many ways, it certainly keeps things bouncing.

Dan RubinMac Apps
Most businesses these days allow for employees to work from remote locations, either permanently or on occasion. Many businesses are …
END_OF_DOCUMENT_TOKEN_TO_BE_REPLACED

Dan RubiniPhone Apps
Ever wonder if there was an easy way to know if something was worth buying? We often find ourselves wanting …
END_OF_DOCUMENT_TOKEN_TO_BE_REPLACED

Dan RubiniPhone Apps
With social media surrounding our every move, it’s important to use one that keeps personal information protected and secure from …
END_OF_DOCUMENT_TOKEN_TO_BE_REPLACED

Get Things Sorted Out With These Organizing Apps

Michael WalshAndroid Apps, iPhone Apps
In a period when everyone is working hard, it might be difficult to keep an eye on everything at all …
END_OF_DOCUMENT_TOKEN_TO_BE_REPLACED