Gladiator Bastards as the name suggests, is an arcade game where you show your skills and fight against characters to pass through each level to become the Bastard Emperor. That’s when the game stops! This game has some really cool graphics and is developed so beautifully that you can sometimes get lost in it focussed on the achievements.

Gladiator Bastards is not that huge an app compared to some arcade games that come in huge sizes, but can be quickly downloaded if you have an internet connection with moderate speed and can be installed without any fuss.

As far as settings are concerned, you can choose to have the music and sound FX on or off, choose language to be either English or Chinese, your achievements can be viewed using the achievements button, set Everyplay recording on or off (setting it on will require app access to take photos and videos + record audio), reset game data if ever necessary (this process cannot be undone) and finally change Gamer ID and picture!

When you start the game, you are presented with a screen where you can see how many coins you have (initially you have 0 coins if this is your initial start), any achievements (for example, you have to prove yourself to be a skilled fighter when it comes to throwing projectiles to get the “Knives of the avenger” medal. When your enemies are afraid of your magnificent air attack techniques, you will be awarded the “Death from above.”) and the six characters available to choose from (only two are unlocked initially, others require coins to unlock). 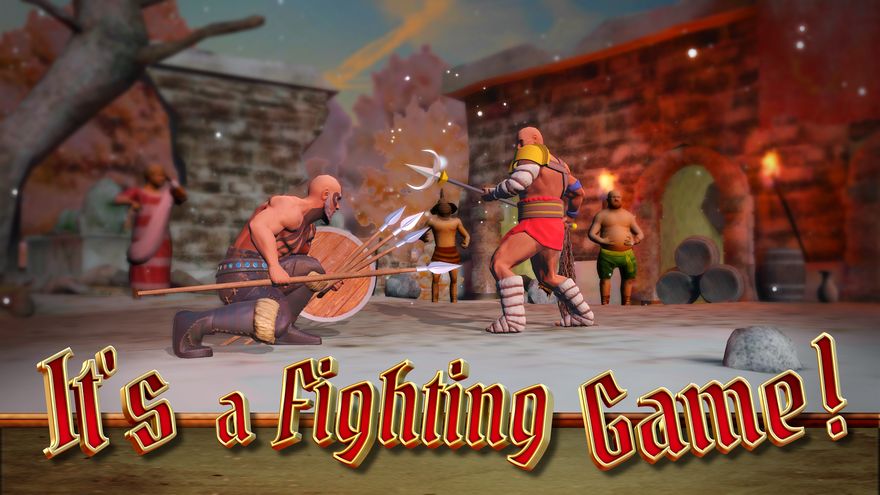 Tapping the screen opens the game area, where you have a joystick that controls your movement (left, right, jump and crouch) and three buttons labelled A, B and C that have skills with different strengths; A being the mildest and C being the strongest.

As you fight against your enemy, you use the weapons and skills that you have (each character possesses different weapons, power and skills) and fight the enemy. Using a combination of the joystick and power buttons lets you portray different skills to attack the opponent.

Progress bars or gauges for each fighter is displayed on top, with two colours; one that is red coloured for life or stamina and the yellow one for skills and survival. As the game progresses, the red bar keeps decreasing, showing that your stamina or life is decreasing and depending on the skills you portray while fighting, the yellow bar progresses. There are three parts on this gauge; I, II and III and as the bar progresses past these values, you get a special move for each.

There are videos that come in between levels, showing up as giving you bonus rewards of gold coins if you watch them, but they look and feel like unwanted and unrelated videos with respect to the actual game.

Dan RubinMac Apps, Other Apps
Ever wish you could save some of those videos you’ve seen on YouTube so you can watch them whenever you …
END_OF_DOCUMENT_TOKEN_TO_BE_REPLACED
1

Fortune City – Get Educated and Entertained

Dan RubinAndroid Apps, iPhone Apps
There is nothing compared to getting educated and entertained all together and at a glance, this gamified finance application seeks …
END_OF_DOCUMENT_TOKEN_TO_BE_REPLACED
1

Track Your Income and Expenditure with Actfi

Dan RubinAndroid Apps
Who doesn’t like using simple, less complicated apps in these crazy days where finding time to have a relaxing cup …
END_OF_DOCUMENT_TOKEN_TO_BE_REPLACED

Tracy DaviesAndroid Apps, iPhone Apps
You can forget to take anything with you on a trip: from a bank card to socks. But you definitely …
END_OF_DOCUMENT_TOKEN_TO_BE_REPLACED