Ever received a document from someone and it was a snapshot or in some form that you were unable to edit, but you really needed to capture and extract the text? It’s annoying when you come across such documents, because sometimes even Adobe Pro won’t recognize the characters and you really don’t want to spend time typing it into a Word doc on your own, just so you have the text. That’s where OCR technology comes into play. OCR stands for Optical Character Recognition. It scans documents, studies each symbol and determines what character it could be.

All you need is an app that does this well, and that app is called OCRTOOLS for the Mac. OCRTOOLS takes popular and well-known image files and does its magic.

The way OCRTOOLS works is simple. You provide it a file, such as a JPEG, TIFF, PNG, BMP, PDF, or GIF. Then you select your OCR Language and if you want a translation language. The text may be in another language, so you need to let the app know this so it can recognize the characters correctly. Once the app has made the file with text, you can then convert it into a different language. There are several to choose from, and recently they added 4 more, making a total of 33. Some languages supporting include English, German, French, Italian, Dutch, Spanish, Hindi, Arabic, Tagalog and many more. 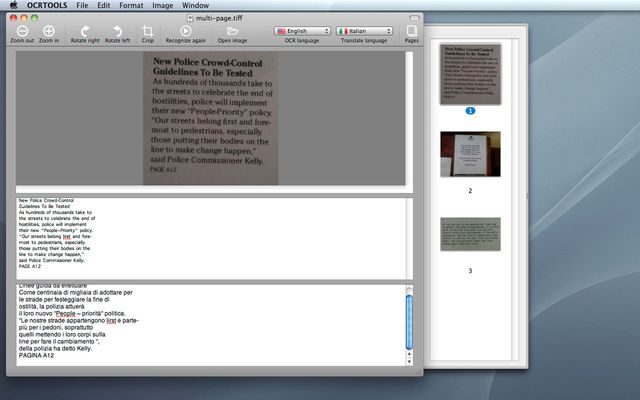 Once you have a text file created from an image, you save it for later use, and you can extract text from there for usage in whatever way you need it.  What is very helpful is the feature that allows you to view both the image and the conversion at the same time, making it easy to verify that the recognition is correct, and it allows you to immediately correct any errors.

What I would like to see is OCRTOOLS for my iPhone. I really need to be able to take snapshots of notes from a whiteboard and many other places and store them as actual text for inclusion into reports and files. That is something I eagerly look forward to, because let’s face it, most of us are on our mobiles more than on our Macs and most situations where you are capturing images are when you are away from your Mac. The website seemed to indicate something was available for iPhones, but the AppStore did not have it, so I will keep checking.

Until then, I will avidly use OCRTOOLS from the Mac to make it possible to capture information in image format and convert it into text that I can leverage for my own use, quickly and without issues. No more typing it in by hand, OCRTOOLS automates image recognition to provide you with the text equivalent.

Dan RubinMac Apps
There are several tools out there that support graphic design, but most people will call to mind the one that …
END_OF_DOCUMENT_TOKEN_TO_BE_REPLACED

Dan RubinMac Apps, Other Apps
Videos capture the story of our lives. Without them, we could not remember the squeals of joy our daughters made …
END_OF_DOCUMENT_TOKEN_TO_BE_REPLACED

VideoDuke – Easily Save and Store Videos to Your Mac

Dan RubinMac Apps
While there are several video downloading apps built for the Mac, one that stands out is VideoDuke. Built by Eltima …
END_OF_DOCUMENT_TOKEN_TO_BE_REPLACED

Save Money and the Environment – Create Booklet

Dan RubinMac Apps, Other Apps
These days most folks read written material using electronic devices. Gone are the days where you hold a physical copy …
END_OF_DOCUMENT_TOKEN_TO_BE_REPLACED
1