Deadroad Assault – Blow Up Zombies with Your Weapon of Choice

Like power in your hands? Are you into the zombie scene and looking for a new kind of app that puts the fun back into a shooter game? Then look no further. Deadroad Assault has come up with a zombie challenge that is not a hit because it’s unique, but because it’s fun.

You are a trucker who has been stranded on the side of the road. Your truck has issues and won’t start. As night falls and darkness creeps in, so do the zombies. At first, they come at you slowly. First one creeps down slowly from the top of the screen down to where you sit crouched behind a rickety wooden wall.

Don’t worry, though. You are not left to just your defenses by only hiding. Luckily, you have kept stashed away in your truck, your powerful Gatlin gun. This gun will take you only so far, though – maybe through Level 2. Oh, that’s another thing, there are several levels to play through, and as you get faster with the taps to take out the zombies, you will advance farther into the game.

Each zombie you take out gets you points. Rack up points to go shopping in the in-app store. Mind you, you will see an ad or two in the store before you get to view the goodies; have patience and this too shall pass. Once you see the goodies that are available, you will be fired up to do better, because you will need better firearms and walls. 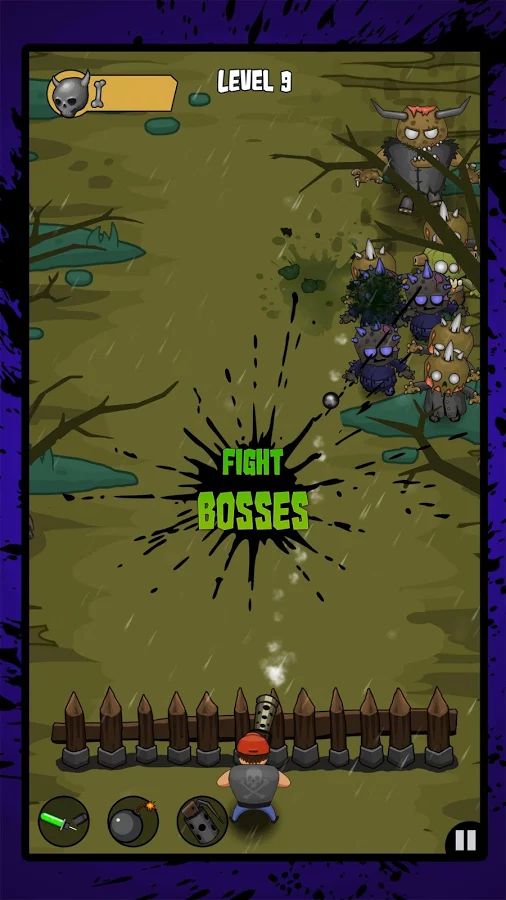 You can also choose to trade in points for powerups, making each tap you blast towards a zombie that much stronger and possible take out more than one zombie per tap. This is something you will definitely need as you move up within each level and into the next levels. The zombies come at you faster and in clumps. This means you either have to become a tapping machine or have bigger blasts.

You will know when you are close to failing a level when you start to see the zombie mob boss show up. Bigger than the regular zombies, he also sports some kind of funny looking bone in his face. See him and you will start to see darker zombies that come at you faster. See him three times, and you are out.

I liked Deadroad Assault a lot, even though it was a bit frustrating the first time zombie boss took me out. But I persisted and got through. I do have to say that the interface got slightly confusing and rapid after I saw the zombie boss and I did not realize at that point that the zombies were going to come at me faster. I was taken by surprise, but just played the level again and again until I figured out what to do. It also required me buying a better blaster, as well.

If you are looking for something fun and simple to play, and like shooter games, then Deadroad Assault is a game to get.

Dan RubiniPad Apps
Commerce in China is no joke. Businesses have been making a beeline to the Orient to capture dominance in a …
END_OF_DOCUMENT_TOKEN_TO_BE_REPLACED

Dan RubiniPhone Apps
If you are like many and are head over heels in love with 3D printing, then you know all too …
END_OF_DOCUMENT_TOKEN_TO_BE_REPLACED

Dan RubiniPhone Apps
Fighting fat is hard. We have all had to face the music at some time or another when we try …
END_OF_DOCUMENT_TOKEN_TO_BE_REPLACED

Dan RubiniPhone Apps
Facearound, an app developed by a team of Italy’s Business Competence is a platform for social networking, for a viral …
END_OF_DOCUMENT_TOKEN_TO_BE_REPLACED