Yup, it’s scientific by nature, but calming all the while. Journey of Water is almost a getaway in and of itself. With a small price tag, it brings the world of water to you, teaching you the basics of where water comes from, what forms it can take, how do we as humans use it, how does nature use it, and where does it go once it been used. Does the water we use come back to us? Yes. While that’s hard to believe for many youngsters, it’s true; and this app helps explain it all.

The graphics are colorful and bright, keeping kids’ attention, while the music is soothing and serene. I find that it calms the kids and keeps them occupied for some time, which is always a plus for parents and teachers. When you first download the app, you’ll see the main screen. From here, you can select what language in which you would like to use the app: English, Spanish, Simplified Chinese and Traditional Chinese. This makes it universally appealing and could even be used as a language learning tool as a side bonus while teaching science.

The overall layout of the app is a sequence of islands that represent where water is used and where water undergoes transformations. The first starts the user off in a city setting. One person is taking a shower, a factory is making something and washing things with water, another person is watering their plants, and the runoff from each of these is shown at the bottom of the screen, representing the sewer system. The water is of course “treated” before leaving the sewer system and makes its way to a river. This is the next island. In the city, children are encouraged to tap on water drops to learn more about each use of water and what happens to the water after use. 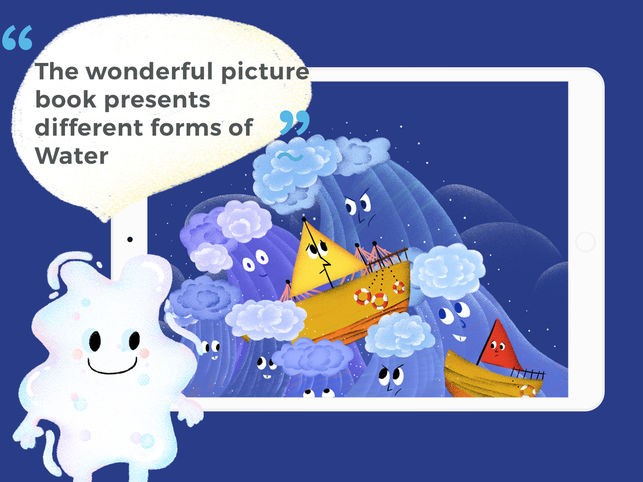 As you tap on and perform different basic activities, the app moves you along to the next step. Geared for younger children, the app will prompt players on where to tap and what to do to carry out a function. There is nothing overly complicated, not that kids can’t figure it out, but the point of the app is to gently educate. There are several informative screens that talk about the three scientific forms of water. Teach them to kids at an early age and they will be able to move on to more complex concepts in science class.

There is a portal for parents only which adults can get to by solving some equations. I’m not really sure why they did not want kids to gain access except for the fact that you could send an email.

Overall, Journey of Water is a very interesting and educational tool that parents and teachers can use to help start or supplement a science curriculum. Sometimes watching and listening help to get an idea across, and this app has done a good job of teaching humans about the importance of water.

Dan RubiniPad Apps
Restaurant management has taken leaps and bounds when it comes to increasing efficiencies and improving up on the customer experience. …
END_OF_DOCUMENT_TOKEN_TO_BE_REPLACED

Dan RubiniPhone Apps
With almost everything we do involving an app or some kind of account, it’s no wonder we’ve taxed our brains …
END_OF_DOCUMENT_TOKEN_TO_BE_REPLACED

Dan RubiniPhone Apps
Who has time to visit the gym and attend training session laid out by a trainer? Not only is it …
END_OF_DOCUMENT_TOKEN_TO_BE_REPLACED

Victoria WilliamsiPhone Apps
There are over a million online games online that are boring and take away your cherished childhood memories. But Rune …
END_OF_DOCUMENT_TOKEN_TO_BE_REPLACED