Speaktoit Assistant is a new app that was created to make your life simpler and more organized. Speaktoit makes voice-controlled apps and interfaces, and its Assistant is a prime example of this. The first thing that you need to do before using this app is create an account. The alternative is to use your Facebook account to log in. If you just want the app’s basic services, you can download it for free, but there is a small charge to upgrade should you want premium version.

Your first time using the app, your personal assistant will greet you and ask for your name. She will also let you know that if you would like to change hers, you can at any time. After introductions are out of the way, she shows you a quick tutorial detailing how to use the app and what it will be doing for you.

After the tutorial is complete, your assistant will go to work for you. An avatar for your assistant is prominently displayed on the screen, and below it, text balloons come up any time you speak a command or your assistant responds to one. On the bottom of the screen, there are five buttons: a mute button to quiet your assistant, a button that will let you put in commands via text rather than voice, the microphone button which allows you to speak whatever command you like, a skills button, and a button to change the app’s settings. The skills button is especially useful; when you press it, all of the possible commands that you can give your assistant are listed, and tapping on any of them will show you an example of the command so that you know exactly what it does. You have the option of changing the avatar of your assistant. You can make them male or female, pick the clothes that they wear, or change their hair color and style, eyes, nose, and mouth, just to name a few. It could be as though you fired and re-hired a new, fully trained assistant every day! 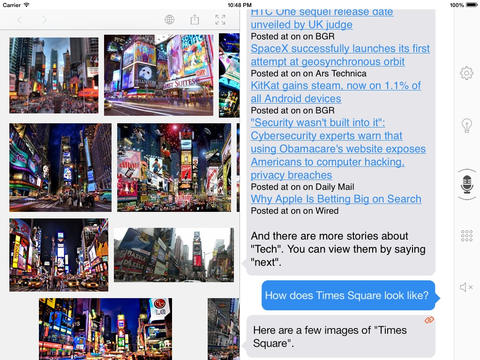 There are many different things that Speaktoit Assistant can take care of for you. Whether you want to do web searches for information, get maps, see the latest news headlines, check your stocks, or update your Facebook status, your assistant can help you. There are many other tasks that Speaktoit Assistant can handle, and it tends to do so very effectively, save for the occasions where it doesn’t understand what you are saying, in which case you usually just need to slow down and speak more clearly. Now the only downside here: Siri can perform most all of these functions as well. The good news, though, is that Speaktoit Assistant tends to do them a bit faster, where Siri often has to think for a while. The standout feature in Speaktoit Assistant is the translation function. When you ask Siri to translate something, she usually just does a web search, and the translation is rarely displayed in the results. Your assistant quickly shows you the actual translation, no sorting through website descriptions needed. I tried many different phrases in probably around 10 languages, and had no problems whatsoever.

Speaktoit Assistant also has a conversation mode that simplifies its use a bit. You only need to press the microphone button once, and your assistant will activate it any time it’s needed again for the duration of that conversation. This is helpful when trying to get to the desired end result after giving a command, and can also be fun when just pointlessly conversing with your assistant.

The premium version costs $5.99 for the lifetime membership, or $2.99 per month. Seeing as it pays for itself in two months, it makes a bit more sense to go with the lifetime membership. There are a number of additional features you get for the price, a few of which are different voice options for your assistant (Male or Female, and you can select different accents), activating your assistant by voice, and having the app free of ads.

And lastly, there is mention in the app of your assistant learning in two ways. One, by way of the developer continuing to “teach” it how to more effectively respond to commands, and two, by learning from interacting with you on a daily basis. This, however, is what I’ll call “educated speculation”, as the app hints at this, but doesn’t come out and say it.

Speaktoit Assistant has a lot of useful features, and executes them well. The conversation mode keeps it simple by reducing the number of times that you need to press buttons, which is good seeing as this is a predominantly voice-controlled app. The translation function is probably the coolest part of all, with quick and (I’m assuming, since I don’t speak most of the 10 languages that I tried) accurate responses.  It might be nice to have some additional features that set this apart from Siri.

Speaktoit Assistant is a function-rich app that makes performing a number of tasks very easy. Of course, Siri can do a lot of these things as well, but Speaktoit Assistant by and large accomplishes them more quickly and accurately. And seeing as the basic version won’t cost you anything, you should at least check it out to see if it works for you.

Hirred – Land a Job with a Video Clip

Dan RubiniPhone Apps
It sounds strange, but yes, in this day and age of technology driven business, we find that networking has found …
END_OF_DOCUMENT_TOKEN_TO_BE_REPLACED

Dan RubiniPhone Apps
Looking for a simple game that echoes gameplay of yesteryear? Bomb Survivor is one of those games that has you …
END_OF_DOCUMENT_TOKEN_TO_BE_REPLACED

Dan RubiniPhone Apps
Are you planning on continuing your education by taking classes at the collegiate level? Ready to go, but having a …
END_OF_DOCUMENT_TOKEN_TO_BE_REPLACED

fontgram for Quick and Easy Photo-Editing

Dan RubiniPhone Apps
Getting started in fontgram is quick and easy, just like an application of this category should be. fontgram intends to …
END_OF_DOCUMENT_TOKEN_TO_BE_REPLACED