Want to get the leg up on your fellow fantasy football managers before it’s too late, and you lose the annual bet and have to wear a sundress to the Super Bowl? Well, look no further than Injury Predictor, a new app that has hit the iTunes Store from Teach Me Sushi. The app, which costs $2.99, has over 50 metrics that factor into their ratings, and their patent-pending ratings are generated for other services, such as Advanced Sports Logic’s The Machine. The app offers managers the chance to make trades and research players on the bus, at work, anywhere they’ve got a connection, with a great interface instead of non-mobile sites. 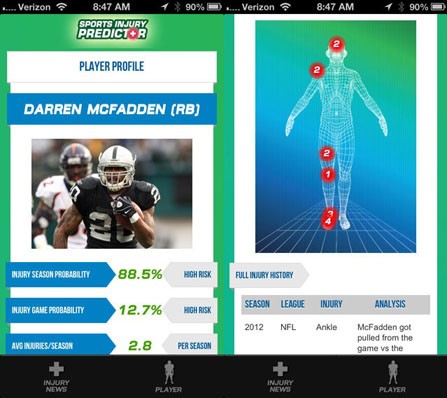 Injury Predictor works really well, and is simple to operate. Users will open the app and type in a player’s name, selecting it from the names that drop down. This will bring up the player’s profile, with their name, position, and a picture of them. Following that are the player’s injury season probability, helping players determine whether a player is a high or low risk for missing the whole season. Also included is the player’s injury game probability, their likelihood that they’ll miss games throughout the season. After this is the player’s average games missed and average injuries per season ratios, which help managers get an insight into the number of games a player misses, and lets them decide whether or not it’s risky to see if that trend continues.

Following that is a short bio on the player, and a diagram of recent injury sites. Finally, Injury Predictor offers a complete breakdown of the player’s injuries over the course of their career, including detailed information on the plays that caused them. The app also includes a feed of recent injuries and updates that will help players to become better in-tune with up-to-date injury reports. This is perfect for fanatics, who may want to dump or trade a player as soon as they hear he’s injured, perhaps before the other person involved in the trade knows, tricking them into taking a less-than-desirable trade. 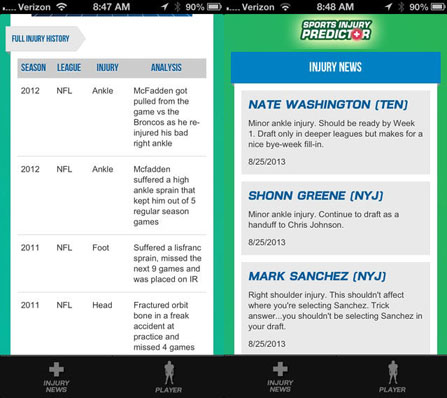 Injury Predictor’s main weakness is that it is essentially useless to members of dynasty leagues. The app has potential but at this point only has players who have been in the league for a number of years, and is very low on rookies. At this point, only members of redraft leagues would benefit from this app, since the option to continue to pick up veteran players each year would allow them to look at the injury stats on players each year. In addition, other things that are available on the Sports Injury Predictor website, such as comparing players, searching by position, or analyzing a player’s team, are not yet available on the app.

Overall, Injury Predictor’s $2.99 app is a great way for managers to get more information on potential trades, and give them a leg-up over their fellow managers. While the app does have some pitfalls currently, it makes sense that the app developers will continue to add players throughout the season as they’re injured, and as they’re needed. The app will work wonders for struggling managers, but the 68% success rating from the 2012 season leaves a bit of a wildcard, keeping the game from becoming too calculating and dull.

Dan RubiniPhone Apps
Have you ever looked back at a picture you’ve taken in your phone, from some long lost forest drive, of …
END_OF_DOCUMENT_TOKEN_TO_BE_REPLACED

Dan RubiniPhone Apps
Have you been the recipient of one too many speeding tickets? In some states, you can get away with your …
END_OF_DOCUMENT_TOKEN_TO_BE_REPLACED

Enhance Your Customer Loyalty with iGenApps

Tracy DaviesAndroid Apps, iPhone Apps
Whether you want to provide your buyer persona with a free service to build your brand reputation or even you …
END_OF_DOCUMENT_TOKEN_TO_BE_REPLACED

Dan RubiniPhone Apps
Life is too short to waste time trying to figure out what you need to do, what you’ve completed already, …
END_OF_DOCUMENT_TOKEN_TO_BE_REPLACED