Subscribing to cable is quickly becoming a thing of the past. Now, because we can stream video on smartphones and tablets, “watching TV” doesn’t have to involve a TV anymore. You can watch just about anything from any device, as long as you a solid WiFi connection or you’ve got plenty of data to use.

But, what if you there’s something you stream on your devices, but now want to watch on TV? Well, that’s where ArkMC Pro wireless media streaming server and video player comes into action.

ArkMC Pro is the only DLNA/UPnP application that is able to stream media from iPhones and iPad to HDTVs, Macs, PCs, Xbox360, PS3, and AllShare TV. It can even stream to dummy screens, as well.

When you open the app, the first thing that will hit you is how easy it is use. You can search through all kinds of content you keep: movies, videos, photos, and music. The controls are simple and straightforward, which makes using this app very intuitive.

What is really neat is the ability to stream multiple media files to different screens. Imagine being able to stream a video from YouTube that you want to watch on your iPad, while you’ve have Nick Jr. streaming on the TV. Your kids will be happy, and so will you!

If you know you will be out of town or out of the range of WiFi, and you want to catch up on your show that you have on your iPhone or iPad, simply download them to the app’s Document folder, and voila, you can watch them offline! 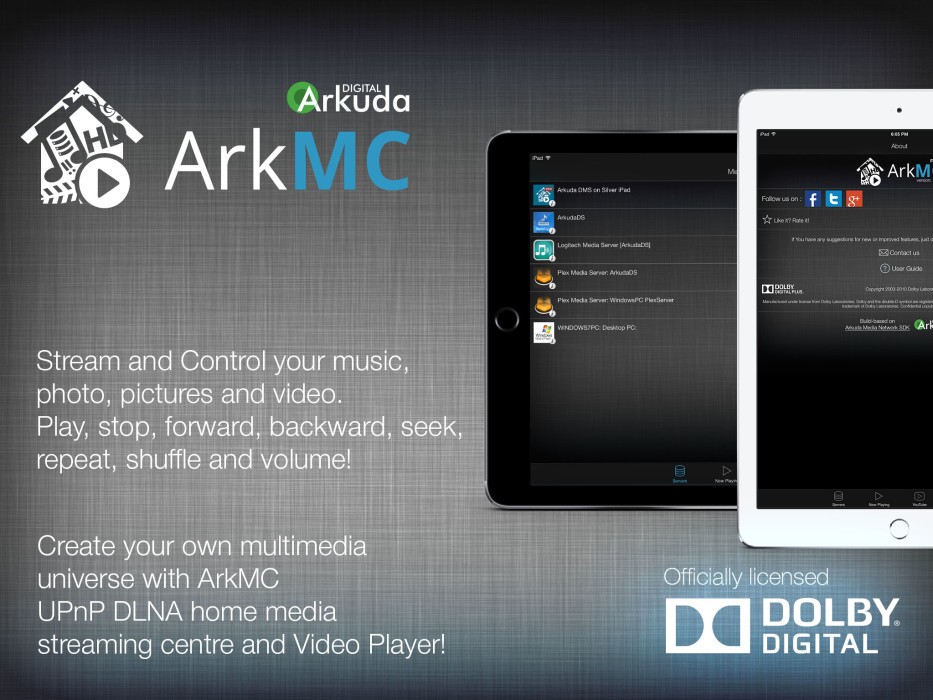 What is especially nice about ArkMC, is that you can turn on subtitles. It supports multiple languages, as well, so you can view a variety of international videos and get the benefit of translation. It’s also a blessing if you have a show that’s in English, and you want to show it in another language.

On the more technical side, the app’s media player has been skillfully designed to consume minimal power, which means you can watch a movie without worries.

Because it is works without wires, you can use it anywhere. You can be sitting at a friend’s house and you’ll be able to stream the photos from your last vacation on their TV. You could be in a hotel room thousands of miles away from home, and watch your favorite episode of Downton Abbey, that you just purchased. The sky is the limit with this app.

Built into the app is a unique YouTube integration that lets you stream music and videos continuously; something you cannot do on any Smart TV. Simply create your own channel and populate it with your favorites. Then, when you want, you can select your channel, sit back, and relax.

The only small snafu with the app is that the controls sometime take a while to kick in. While I was streaming some photos to my TV, I wanted to stop the slideshow and show the previous photo. As I selected STOP, it took almost a minute for the streaming to stop.

Other than that, ArkMC Pro is absolutely amazing. I love that I can send and then control multiple streaming media to various destinations throughout my house, so that everyone is happy, and I remain in control.

Dan RubinAndroid Apps
One of the world’s best and most trusted home security and video surveillance App, AtHome Camera transforms about 10 million …
END_OF_DOCUMENT_TOKEN_TO_BE_REPLACED
1

Dan RubiniPhone Apps
With almost everything we do involving an app or some kind of account, it’s no wonder we’ve taxed our brains …
END_OF_DOCUMENT_TOKEN_TO_BE_REPLACED

Deadroad Assault – Blow Up Zombies with Your Weapon of Choice

Dan RubiniPhone Apps
Like power in your hands? Are you into the zombie scene and looking for a new kind of app that …
END_OF_DOCUMENT_TOKEN_TO_BE_REPLACED

Michael WalshiPhone Apps
Imagine a breezy Sunday evening. After a heavy lunch, you are relaxing on your extra comfy couch, with no work …
END_OF_DOCUMENT_TOKEN_TO_BE_REPLACED