Match the Three Stooges – A Brilliant and Fun Game

There are a lot of fun games on the market. Some of them can be very complicated and hard to play while others are a lot simpler and easier. Games have come a long way from simple things like the game of snake or point and click, and while other were playing snake some were watching the three stooges. Games that have become a lot more popular are match three games, a game that combines the old gem of the three stooges and the new game of match three is called Match the Three Stooges.

Match the Three Stooges has a wonderful user interface with a very colorful design. There are 5 worlds that you can play through, the scenes, pictures, and music change every 5 levels in the game so the colors and design are always changing. There is a total of 100 levels which means there are 20 different pictures and songs to look forward to as you play through the game.  There are even boss levels where the music changes and transports you to new levels and new worlds. 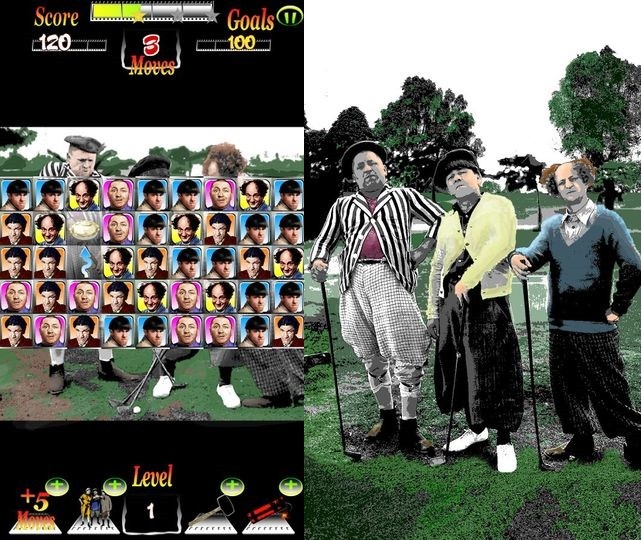 The game has been designed by a former Call of Duty designer known as Brian Douglas, he puts a spin on the classic pictures from the original stooge movies. The classic Three Stooges Volume soundtrack has been changed and renewed by Murv Douglas, who has been in the bands Powerman 5000, Lords of Acid and Diamonds n Scratch. These new twists are shown throughout the game as you match the stooges and earn more points to win the game.

It is very easy to play the game, you start up the game and begin to play on the first level and the first world. The objective of the game is very simple, to match three of the same stooge, once done the match will disappear and more will fall to take the tiles places. Once done you will earn points and when you earn a certain amount of points you will complete the level and move on to the next one!

This game is great to play and provides fun for the whole family while taking up a lot of time. There are a couple of small things that would make the game better if fixed, the game is still of a high caliber but as with all apps there are a few flaws. With this game you have to have an internet connection to play the game, which can be a little difficult if you are on the go and don’t have network coverage. Another thing is that there are only 100 levels, and if you play a lot you may not have any more to play. The developers will respond to any suggestions which means they really care about where their app goes.

Match the Three Stooges is a brilliant and fun game for anyone of all ages to play. It’s simple and combines the classic stooge music (sung by the stooges themselves!) with the modern match three games available on phone and tablets anywhere. This game is a must have for all fans with the option of competing against your friends and bragging about your high score. Now this game is free to download and play with the option of purchasing somethings in app. I recommend this to everyone who like to play games!

Whataplace Helps You Find Where You Want to Go

Dan RubinAndroid Apps
Traveling can be a big hassle, you are away from home with no sense of direction and it seems like …
END_OF_DOCUMENT_TOKEN_TO_BE_REPLACED

pickWEB for Android – Information on Your Hand

Dan RubinAndroid Apps
Are you tired of browsing through umpteen websites before you find the exact information you are looking for? Is your …
END_OF_DOCUMENT_TOKEN_TO_BE_REPLACED

Dan RubinAndroid Apps
The game story is around a prophet, Mefasim, who found the player, and thinks that the player is the one …
END_OF_DOCUMENT_TOKEN_TO_BE_REPLACED

Tracy DaviesAndroid Apps
The digital revolution brought about by the internet has completely transformed the way we conduct our professional and social lives. …
END_OF_DOCUMENT_TOKEN_TO_BE_REPLACED