Photo Collada is an application developed by VicMan Software for those who have Android smartphones. It is the top of the line application right now to produce photo collages. The application features a number of options bundled up together in a high quality application that also allows for one-of-a-kind decorations, customization as per the user’s will and sharing of everything through social networks.

At a glance the main features of Photo Collada are :

With a selection ranging from the most basic to the most unusual ones, it is possible to produces collages from a single photo to as many photos as exist in the gallery. The number of options exceeds any and all provided by similar apps available.

The users’ imagination and wishes are the limit here. They can choose from a number that is far greater than anything that existed in the past, of solid colors, distinctive backgrounds, 3D rendering options and a lot of others which can be added in batches or one at a time.

Any application that respects itself should never be released without providing the user with the ability to caption photos with the appropriate text. Photo Collada includes a routine with enough fonts and styles to write slogans easily and with a high degree of distinction.

The rage of the era has sharing over social networks as a must. Photo Collada follows this notion and provides the easiest way possible to upload the user’s creativity to any and all available social media networks. 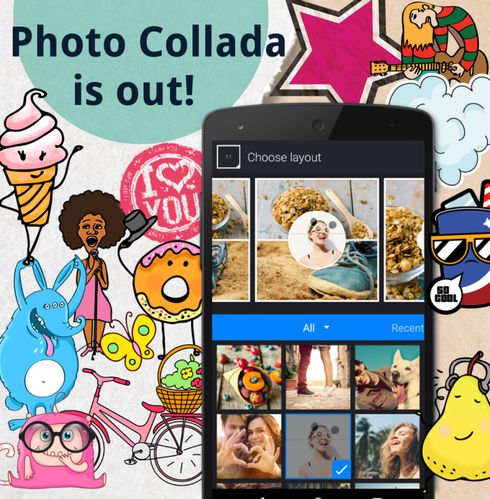 Photo Collada is the easiest to use and most complete application in comparison with its competition. The features that people wanted have been included along with some additional ones. Overall the rating is 4.2 out of five with the definitive advantage being the chance to shape things in any way the user wants.

Photo Collada app is only available for Android smartphones. But that’s not the end of it as even the phones that operate in older versions need to upgrade to a newer one before the app can be installed. Some phones do not even have the capability of upgrading, therefore the number of potential users is severely limited.

Photo Collada clearly offers the most complete package in reference to photo collages than any other app in the category. More and better options can be found in dedicated software that is not free and does not offer the bundled solutions that this application does. It is clearly the best such app for tablets and smartphones, but VicMan must see to it that the next versions released can operate either across operating systems or at least in iOS. It is a pity to limit the number of users that can appreciate what Photo Collada can do.

NiLi – A City Concierge at Your Fingertips

Dan RubiniPhone Apps
No one really knows everything about what’s going on, even in their own city. Sometimes you’ll be sitting on a …
END_OF_DOCUMENT_TOKEN_TO_BE_REPLACED

Michael WalshAndroid Apps
If you want to have a smooth experience of using Instagram then you are at the correct place. Getinsup provides …
END_OF_DOCUMENT_TOKEN_TO_BE_REPLACED

Dan RubinAndroid Apps, iPhone Apps
If you need some straightforward, to-the-point search results- done in a rapid manner too- you don’t have to look much …
END_OF_DOCUMENT_TOKEN_TO_BE_REPLACED

Dan RubinAndroid Apps
Tabata is a high intensity interval training that incorporates both fitness and weight loss. It is a very short workout …
END_OF_DOCUMENT_TOKEN_TO_BE_REPLACED