Turn based games come in all shapes and sizes. If you are looking for one that’s ok for the kids and may even get you in on the action, download Shiba’s Adventure. It sounds like a lot, but it’s fairly simple and not overwhelming at all.

An RPG where you take on the role of a dog, and a small cubical one at that, your aim in the game is to survive in what is supposed to be a series of dungeons. When you download the game, you’ll first get a chance to play in a tutorial. The tutorial is setup pretty much in the same way as the game. The first thing you’ll do is choose your dog. The game has 10 to choose from, but you start off with the first one for free. Look closely, because you’ll see that dogs 2 through 10 require 1000 coins to purchase. You’ll get those coins as you play the game.

Now, once you choose your dog, you start the tutorial. The tutorial is laid out on playing fields that look like a chessboard. There is one chessboard per day. On day one, your aim is to learn how to swipe your dog around the board to collect coins and food. The food looks like a hotdog, but I’m not sure, as the graphics are very Minecraftish. 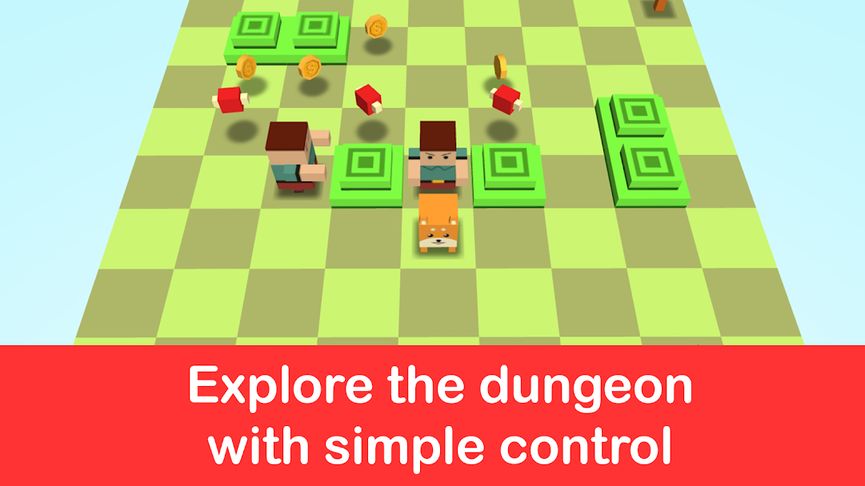 Not as simple as you may think

Move your way through the different days in the tutorial and then you will get to real game play. Here, you can play through the game center and invite others to play with you or you can play on your own. As you safely complete each day or level, the app will randomly create new levels of challenge for you, which means the game is not as simple as you may think it is. It really does provide a challenge.

Swipes are short and sweet. In fact, I found them to be very inefficient. I wanted to move a few blocks and my dog would only move one block at a time. It was a bit disconcerting, especially when the “bad person” started nearing. Oh, and that’s another thing; you have to avoid the bad people in the dungeon because they will capture you and make you their pet. If that happens, then obviously, game over. Your goal is to collect all the coins and food and get to the sign post to get to the next playing level, before the bad people get to you. While that may be easy on Day 1 or 2 or 3, you will be forced to focus and be wary and move fast after that.

All in all, the game is fun and will pull you back for more. You won’t be able to put it down because you’ll want to get to the next level and the next, and then purchase a new dog and play with that. You also get to collect the dogs as you purchase them.

If you want a new and fun game to download, I recommend Shiba’s Adventure – it’s like nothing I’ve seen before.

Dan RubiniPhone Apps
Detail 📸 #AR #VR #3D #3dart #3dscanning #3dmesh #wireframe pic.twitter.com/pHPcnllZpe — Scandy (@ScandyCo) November 2, 2018 Got no 3D scanner? No problem, as long as you have an iPhone X, XS, XS Max or XR. Scandy Pro may not be …
END_OF_DOCUMENT_TOKEN_TO_BE_REPLACED

Dan RubiniPhone Apps
Most of us can type pretty fast on our devices, but if you are looking for a way to send …
END_OF_DOCUMENT_TOKEN_TO_BE_REPLACED

Dan RubinAndroid Apps
Nothing is better than an app that is useful. Sure, you can have lots of apps that entertain, inform and …
END_OF_DOCUMENT_TOKEN_TO_BE_REPLACED