Most match games offer one basic thing, the challenge to linearly assemble items that are the same, whether it be horizontally or vertically. It’s fun for a while, but when you grow past whatever excitement you initially felt, the game tends to pale in the light of others.

If you just can’t let go of playing match games, but want something more than just a grid with icons that you need to clear, download Totem Rush.

Immediately you may wonder what the “rush” means, but as you play and move more into the game, you will discover why.

In Totem Rush, you are the protector of an archipelago of islands. Your ultimate goal is to protect each of these islands from war mongering invaders. OK, well, they aren’t as vicious as that, but they are invaders that want to take over your island.

They do so by trying to capture your ship, make their way to your island, and overtake the settlement. 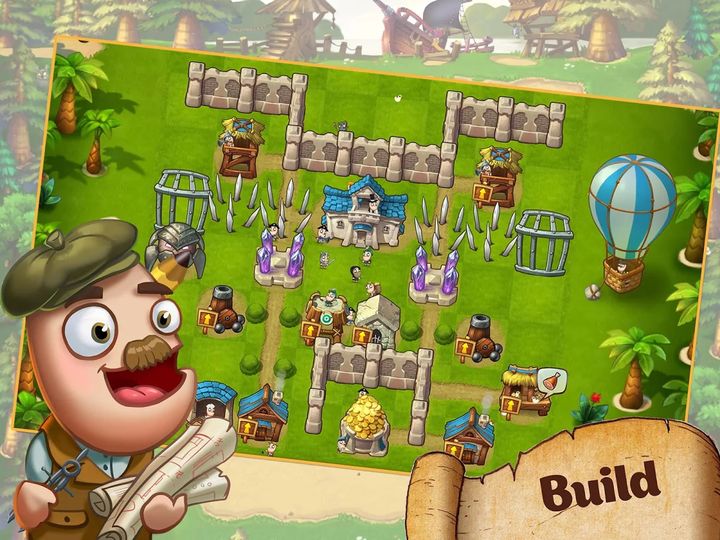 You are challenged by the game to protect a series of 19 islands. Each island represents a phase of play. Conquer the challenge presented at each island, and you move on to the next phase, or island.

I have never seen a game so involved as this. It provides a complex blend of simple game play – a match game – with a more involved and strategic test – to defend an island.

Just when you think you will get bored with the matching, you are transported to another part of the app and find yourself building up defenses and keeping invaders at bay.

What I found helpful were the hints and suggestions on what to do.  Every so often, there would be a finger pointing to an object, asking you to move it this way or that.

Totem Rush itself does not have a main menu or screen, so there is no information page or overview. You have to dive in and figure things out on your own.

What puzzled me most in this app was that at one point, I was shown the series of islands and my progress. It looked as if I needed to complete the games on island number two, but I had no idea how to start those games. I tapped on the island, on the cards that sat beside the island, and on various other icons, with no luck. It was confusing and I was not sure how to proceed.

Nonetheless, I did have fun playing the match part of the game. When it transitioned to the building part, I became confused because it did not seem like I was doing much and I really did not know if I had succeeded or failed.

I will continue to play and try different things to unlock the mystery and get to the next island – it is much too tempting to be left alone. Totem Rush is also available on Android.

nRadio – Personalized Radio That Plays Sounds from Around the World

Dan RubiniPhone Apps
Listening to the radio is not what it used to be, thanks to super speedy devices and the power of …
END_OF_DOCUMENT_TOKEN_TO_BE_REPLACED

Tracy DaviesAndroid Apps
Having a reliable antivirus app installed on your android smartphone is very crucial. After all, the android platform is the …
END_OF_DOCUMENT_TOKEN_TO_BE_REPLACED

Turn Your Smartphone into a Powerful, High-quality Scanning Device with MT PDF Scanner

Tracy DaviesAndroid Apps, iPhone Apps
There were days when people used to seek the help of different types of scanners to scan photos, documents, receipts, …
END_OF_DOCUMENT_TOKEN_TO_BE_REPLACED

Music Cube – Configure Your Own Music