Castle Breakout – Escape or Be Doomed

What makes “escape the room” games so addictive? Castle Breakout – Escape! is an example of such a game and it holds the answer for us.

The game by Cloudburst Team, is for those who seek a little medieval adventure while they solve their puzzles.

A security master named Rex, is trapped in a castle around the 11th to 14th century. One must enter each room and find their way out by solving puzzles and finding clues. The clues are often right in front of you, hiding on the walls and in the fruit bowls- keep your eyes peeled!

You venture into an old pantry, alchemy room, and the king’s quarters. Each room is charming, elegant and some are a little… dusty.
Just as if you you were trapped in real life, you have to sort of “feel around” the rooms for clues; you do this by tapping on items and obstacles. You will know when you’re on the right track because tapping on suspicious items will automatically zoom you in on them.
Even if items seem dull and pointless, keep on tapping around them and the area they are in- you never know what might be hiding in the corners. The items you collect go in an inventory on the right hand side of your screen.

For example, in the alchemy room there are draw knobs that are missing, maps to be found, and potions to be made. All of this is waiting for you to put together. 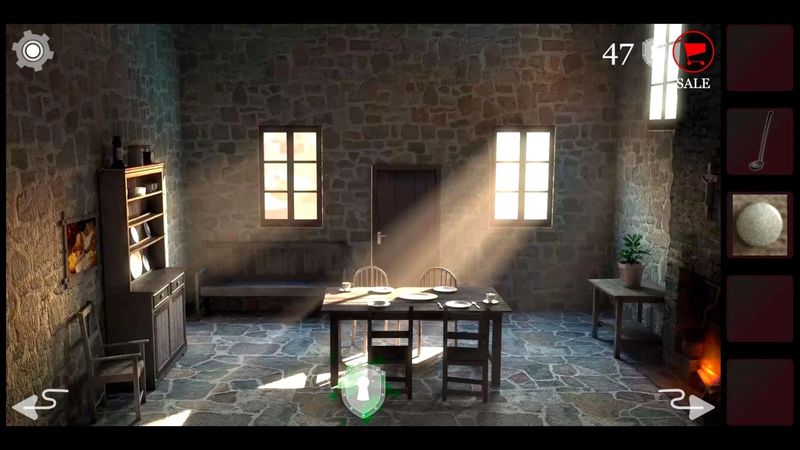 Once all the clues are found and all the pieces are in place, the door will finally open.

If you fail to interact with the room and puzzles, you must prepare to suffer a lonely fate. There are no shortcuts, only one door reveals the way out, and when you do escape a room, be prepared for the next one! Golden Gauntlets Castle Escape

The graphics will take one by surprise, they are absolutely beautiful. In one room, you can tap on a window that will zoom in on the kingdom outside, it’s breathtaking.
The in-game sounds are realistic, they add to the mystique of the rooms.
In the menu, you can control the sounds, share the game, and find a short tutorial.
After getting the hang of moving Rex around, you will be disappointed with only ten rooms- you will definitely want more!
Each room is different and alluring in it’s own way.
Every environmental puzzle is unique- one puzzle could involve mathematics and another could test your memory.
Not all the best things in life are free, so it could be frustrating to see that the last three rooms will cost you three dollars. But, at the end of it all, there is a free dragon ride that awaits you!

These escape games tend to be addictive because they are challenging and make one scratch their heads a bit. You just naturally want to find your way out. After all, who wants to be trapped in a medieval castle forever? This app is available on iOS and Android.

Dan RubiniPhone Apps
I typically like to try out various simple recreational mobile games, and the screenshots of this one seemed decent so …
END_OF_DOCUMENT_TOKEN_TO_BE_REPLACED

LINGOKIDS – Easy English for Kids Anywhere in the World

Dan RubiniPhone Apps
The world is growing closer and closer together. We interact more with folks from other continents than we do with …
END_OF_DOCUMENT_TOKEN_TO_BE_REPLACED

Dan RubiniPhone Apps
First of all, let me start by saying that this is the most stylish weather forecast app I have ever …
END_OF_DOCUMENT_TOKEN_TO_BE_REPLACED

Mendeleev.me – Chemistry Fun without the Mess

Dan RubiniPhone Apps
Learning chemistry is no fun unless you can see it in action. We all have to take this class as …
END_OF_DOCUMENT_TOKEN_TO_BE_REPLACED