If you are looking for a challenging shooter game and haven’t found it, look no further. Sniper Ops 3D tests your power over precision with a technologically charged app that astounds all who play. Your mission is to help save the world from mass destruction brought on by enemy who inflict terror to take over.

The game tests your ability quickly target and take out the enemy, no matter who they are. In over 200 different scenarios, your skills will be tested; skills that require precise placement of your weapons and swift shots. Miss a target and you may the one taken out.

The app is a free download, so it’s easily accessible to all. Keep in mind that due to the nature of the app and its content, it is not wise to allow children to play. We all know it’s just a game, but it may not be appropriate for the younger folk.

After downloading the game places you in one of its starter scenarios. This is nothing to sneeze at because even the beginner level provides enough challenge. If you are already what you would consider an expert, then you will have no issues moving through quickly to a level that offers the challenge you seek. There are over 200 games to play, so you will never get bored, and the app creators are constantly enhancing the app, so each scenarios may change even as you are in it. 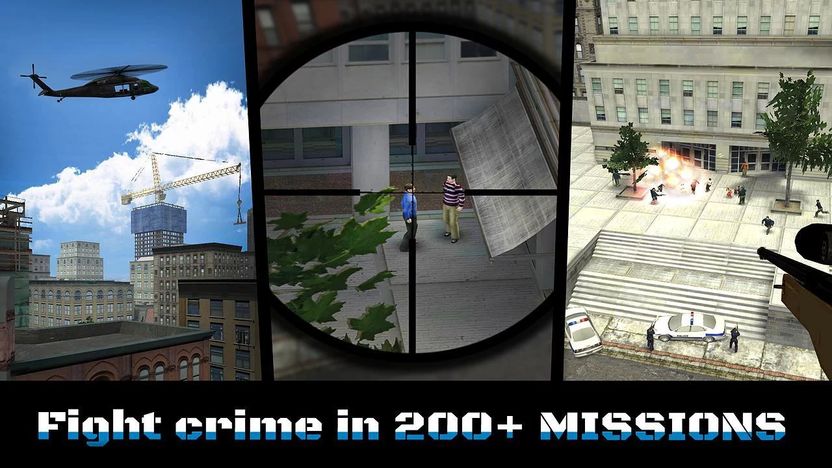 Now, we come to why you are a sniper. Well, your aim in the game is to put your sniper skills to the test by using expert targeting skills to loom in on the enemy and take them out. Who’s the enemy, you ask? Terrorists trying to take over the world.

Mind you, you are not alone in the fight. The world’s defenses are all at arms trying to keep the enemy at bay, and they need you, an expert sharpshooter to help. Whether you like sharpshooting or not, you will be drawn into this game, because the graphics and sound pull you in the story and you can’t help but engage and fight.

Initially, you may not have the best of weapons, but that slowly changes as you add to your list of successful target destructions. Earn enough coins and see your selection grow, allowing you to choose more powerful weapons and ammo.

The game moves fast, so you have to move faster to keep up. You will never grow bored playing Sniper Ops 3D. If you have found that you have exhausted your ammo reserves and still want to play, then the app offers in-app purchases that allow you to restock your coins and continue. In-app purchaser range from “Tiny” packages at $4.99 to the Diamonds Pack 4 at $39.99.

While in-app purchases seem like a underhanded way to pay for a game, you will truly appreciate they exist because they allow the developers to make the game ad free. Imagine being in the middle of a moment when you are carefully following your target for the perfect shot, only to have the app pause for an ad.

I couldn’t recommend a change to this app if I wanted to. I would only remark that there are terrorists all over the world and not just in the Middle East, so scenarios that reflect this would be awesome.

While my progress in the game is moving slowly, I still get a kick out of playing because I have never experienced a shooter game that is so dynamic and diverse. It really places purpose behind the mission which makes playing even more fun. Download iTunes Sniper game and Android Sniper game from these links.

Create Pieces of Art with Paintastic

Dan RubinAndroid Apps
Are you a fan of digital sketching and painting? If yes, Paintastic is an excellent app that will let you …
END_OF_DOCUMENT_TOKEN_TO_BE_REPLACED

Best Pregnancy App in 2022 for You and Your Little Human – Hypnobirthing: A Fit Pregnancy

Michael WalshiPhone Apps
Pregnancy can be as beautiful or as daunting as it can be, depending on how you take it. As Angelina …
END_OF_DOCUMENT_TOKEN_TO_BE_REPLACED

Dan RubiniPhone Apps
GeoSonic is a recently updated app that has hit the iOS app family, adding to the many music experience apps …
END_OF_DOCUMENT_TOKEN_TO_BE_REPLACED

Soundy – Make Your Music Sound the Way You Want

Dan RubiniPhone Apps
Listening to music has moved from large clunky audio equipment to small, mobile devices. While many argue that the sound …
END_OF_DOCUMENT_TOKEN_TO_BE_REPLACED