Many of us are very in tune with who is doing what in the world of A-list celebrities and socialites. It’s almost impossible to avoid with social media blasting the latest gossip, news and photos. If you are like most and love to follow them in all their antics you also know their faces by heart. Now, there’s a game that lets you put that talent to the test. It’s called Fame Face and it’s by AppVillage.

This app, available on iOS, lets you challenge your facial recognition skills by having you guess the celebrity whose face is hidden behind a square of tiles. You get a limited number tiles that you tap away with your fingertips. As you slowly reveal areas of the image, you might already know whose hiding behind. If so, guess! If not, continue tapping the tiles until you do know. The fewer tiles you reveal, the more points you’ll earn, so look harder before you clear more tiles. You also have the advantage of knowing if you’re guessing the first, last or full name; and, you get a set of letters from which to build that name. So, you could potentially just make a few guesses judging by the combinations of letters you have. Guess correctly and earn 10 points. Earn more for every Reveal you don’t use. 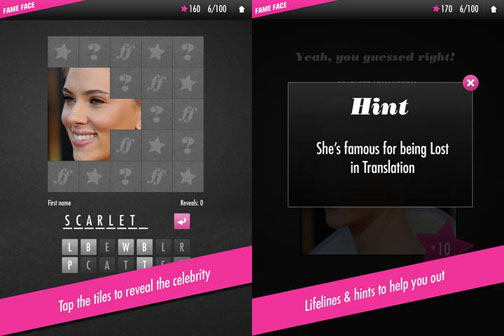 If you’ve revealed all the tiles allowed and have no clue as to the answer, you can get a free hint from a friend, kind of like on “Who Wants to be a Millionaire”, or you can buy different types of hints. Hints include: buy more Reveals, expose a letter in the name, or remove letters from the bottom (so you can take a better guess a the name). I preferred the hint about the person, but that set me back by 300 points! To buy these hints you need mega points in your stash. If you’ve done well in the game, you may have banked a grand or so. If not, no fear…you can visit the in-app store and purchase a few points. Get 150 points for free if you Like Fame Face on Facebook, or pay between $0.99 to $19.99 for 1,000 to 50,000 points. 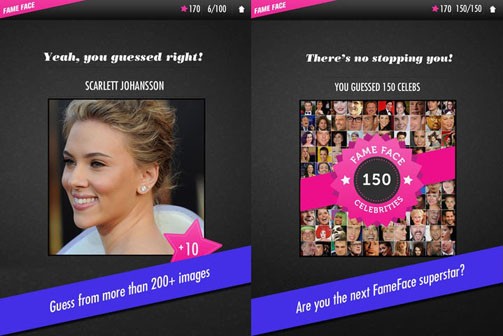 Fame Face is extremely easy to play and keeps you entertained, but if you get to a point where you just don’t know who the heck the celebrity is, then you’ll be forced to either pay up in points or start over. In my case, I am not too excited to pay up for a game, so I would rather start over. Not sure if that gets me a new set of pics to play on, but I would rather try this than spend money. It would be nice if you could just revert back to a previous difficulty level – but again, if the pictures are the same as what you played, no challenge. However, you could get through them faster and earn more points after knowing what to expect.

Awesomely entertaining and engaging, Fame Face is a keeper for me for the time being until I get fully stumped and don’t want to start over. I played for much longer last night than I intended, which speaks volumes for the game. If you are into the celeb scene and need a fun free game to fill those voids in your day, this is the perfect little app!

Dan RubiniPhone Apps
Bored of your gaming selection and looking for something different? Look no further – Playmage has created a JRPG that …
END_OF_DOCUMENT_TOKEN_TO_BE_REPLACED

How to Outsource Mobile App Development the Right Way

Dan RubiniPhone Apps
Apps are a great tool for your business. They make your business more accessible, they can help build loyalty between …
END_OF_DOCUMENT_TOKEN_TO_BE_REPLACED

Create Memories of Your Adventures With Alpacr App

Victoria WilliamsiPhone Apps
Travelling is one of the most freeing activity you can do in your life, and Alpacr makes that experience seem …
END_OF_DOCUMENT_TOKEN_TO_BE_REPLACED