If you are one of those gaming freaks and enjoy indulging in some light board games, then Kumoku is the way out for you. Kumoku is a Japanese word made out of two portions. Ku stands for 9 and moku stands for pieces. So, here we know what the final aim of the game is. It is to get nine pieces in a row, column, diagonal or matrix. And thereafter, you beat your opponent.

Have you played Sudoku, where you had to accumulate 9 numbers in a row, column as well as in a box. The strategy is somewhat derived from Sudoku, but is much easier. You actually don’t have to use much of your mathematical skills to count those numbers down. It is a game involving only xs and os. Not that traditional Tic-tac-toe game! It is different. Few elements are borrowed from it, but the eventual gaming method is original. Instead of three in a row or column or diagonal, you need 9 in a row, column, diagonal or matrix. If you don’t understand these concepts, there is nothing to worry. A total guide is available to you, when you tap on the INFO+ button. Example button can also be clicked to know what all are the winning patterns. 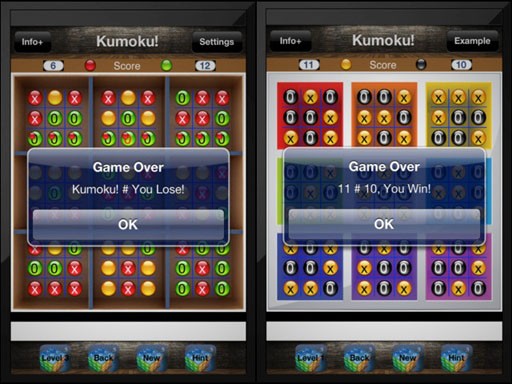 You will certainly not find it boring, since each game is made unique by its developers, Peragames. The irony is that, though the gaming word is derived from the Japanese language, it is not available in the same. Only people literate in English can enjoy this app. This narrows the reach of the app. The developers must at least provide translated instructions in various languages, so that the concept can at least reach the mass.

The moves of the computer are not justified and thus, you may feel that you will always be defeated by the computer. So, for the rescue of these people, the developers have made the options of single player and double player available. You have the freedom to choose a human player opposite to you. A distant friend using the same app can compete with you. This would definitely be fairer! 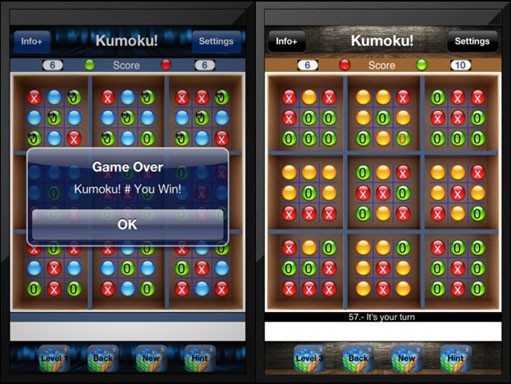 The app takes a memory of 10.6 MB in your devices and so, extra space must be available so that the app does not hang while playing. Apart from a few glitches the gaming works well. Also, you do not have to save your last game manually, the device does it for you. Each minute is saved. This means you can start from where you left.

What if you make a wrong move? You can certainly undo it. With the BACK button you move one step behind. Also, if you cannot think of an appropriate move, you can tap the HINT button, this will ensure the best step for you. If you feel that you want to restart the same game, you can tap the NEW button. One drawback is that, you cannot move to a next level until you cross the levels gradually. So, there is no point being so inquisitive when you can’t play the game well.

The moves are made alternately, you make a move and then your opponent and then again you. This goes on until Kumoku or until all the boxes are full. The person who gets the Kumoku first wins otherwise, the one with maximum three in a row, or column or diagonal wins. The Kumoku app is compatible with all iOS devices having a version of 4.3 or later. So, though easy gaming, one ought to give a try and enjoy the new way of Tic-tac-toe with just a meager amount of $0.99.

Dan RubiniPhone Apps
A new mission-based battle game has been unleashed. neoDefense is a game that tests your strategic savvy and quick reflexes. …
END_OF_DOCUMENT_TOKEN_TO_BE_REPLACED

Dan RubiniPhone Apps
It won’t make the pills go down any easier, but MedOClock is an app that keeps you organized about the …
END_OF_DOCUMENT_TOKEN_TO_BE_REPLACED
1

Dan RubiniPhone Apps
Who has time to visit the gym and attend training session laid out by a trainer? Not only is it …
END_OF_DOCUMENT_TOKEN_TO_BE_REPLACED