Looking for sounds that soothe and lull you to a place where you can forget the world? TaoMix is just the app. There are lots of radio station apps, music players, and playlists you can make to bring together music that calms the nerves and helps you focus. However, this app brings more to mix, offering its own smarts to your customizations.

TaoMix is a sound player with built-in sounds from nature. Sound categories include: Water, Rain, Wind, Thunderstorm, Insects, and more. These sound categories each have many sounds to choose from, but be forewarned: many of the sounds are locked in the free version of the app. Upgrade to the paid version for $1.99 and you will have many more sounds to mix.

The mixer works like this. You tap the plus sign sitting in the middle of the screen, which will take you to the Categories list. Choose a category, and then choose a sound. This will take you to the ambience builder screen which will show a white ring and a circle representing the sound you just added. As the circle is placed closer to the ring, its sound becomes louder. You can then add more sounds to the mix and then save your creation as an ambience.

Build different ambiences for different moods. You can make one for yoga, one for work, one to get you slowly up and going in the morning, and one to bring you closer to sleep. The app also features a timer, making a sleep ambience that is much more functional. Turn it on, lie down and let the sounds do their thing. The app will shut off on its own, per the timer. 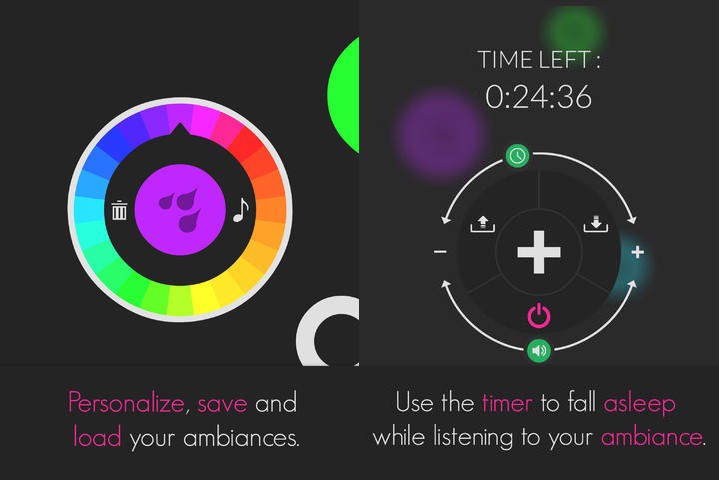 The interface adds to the overall soothing effect brought about by the mixes you create. The entire app has a calm, serene black background. On top of that lay fine lines of text, describing the app in a minimalist manner. The organization and display is neat, clean, and extremely easy to use. You won’t get wound up trying to figure it out, like so many other apps; and, surprisingly, for a free app, it has no ads.

The screen from which you save and load ambiences features an information icon. Tap on it and you are taken to a page that lists all the icons, throughout the app, and their function. I did not detect this straightaway, and found myself fumbling through the app trying and learning as I went. Not a bad way to learn, but a bit more time consuming.

I would definitely recommend giving this app a try if you are looking for a very simple way to build a library of soothing sounds, customized for different effects you wish to evoke. You create combinations that appeal to your senses, and let TaoMix do the rest. The more you listen, the more your mixes will evolve, keeping you wanting to listen more. If you find the free version too restrictive, upgrading will open doors to more mixing.

Dan RubiniPhone Apps
I like to use Siri every so often, but sometimes she just doesn’t get what I’m trying to say. She’ll …
END_OF_DOCUMENT_TOKEN_TO_BE_REPLACED

GoingPlaces – Find Adventures with the Swipe of Your Fingertips

Dan RubiniPhone Apps
Everyone loves a great adventure. Finding out where to go and how to get there is the hard part. Now, …
END_OF_DOCUMENT_TOKEN_TO_BE_REPLACED