If you watch football, and I mean the football known to all around the world, and what folks in the U.S. know as soccer, then you have got to download Live Football Stats and Scores, with no delay.

Live Football is an app for iOS devices that brings football fans closer to the game, bringing live data and streaming to users around the world, from games that are played almost anywhere. It hooks viewers and followers of various matches into the stats that surround the various leagues that pit teams against each other.

You can choose Favorite teams and from there, you can get Live Scores from games that are In Play, view games that are currently in play and mark the matches that you want to follow.

After marking the matches, you can view details on each.

My favorite page in the app is the page that compares two teams. I can go straight to it and see precisely how one team stacks up against another, one a point-by-point basis. This page is found under “stats”. You can compare BTTS%, Clean Sheet, BTTS+Lose %, BTTS+Win %, Cards per game, Avg. Goals per Game, and more.

The page itself it laid out cleanly so you can get to the data you’re interested in. You can even customize it by viewing the stat comparison for the last five games, last ten games, or to date for the season. You can also choose All or HvA. 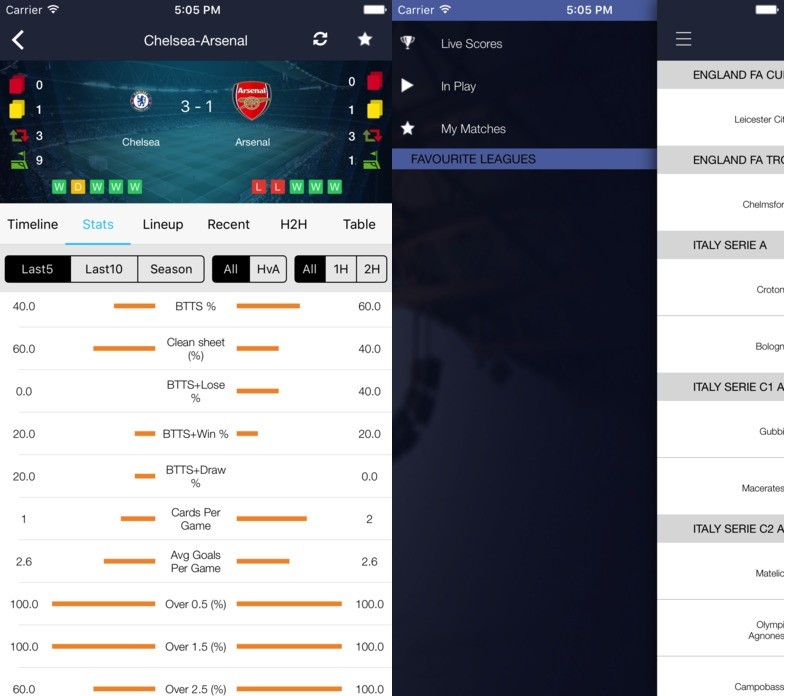 I skipped a page, though. When you download the app, you will see six options to view: Timeline, Stats, Lineup, Recent, H2H, and Table.

Timeline takes you through each game and marks key plays in the game, noting the number of minutes into gameplay, the player, and what happened. Items that are tagged include yellow cards, red cards, corners and goals. This is listed for both teams in the match.

Recent displays games recently played for each team in your matchup, but it shows all other teams each team has played. For instance, in a matchup, if you have Chelsea and Swansea, it will list recent matches for both Chelsea and Swansea. If you select Mixed, it shows where Chelsea was Home and Away. If you select Away, it lists only those games in which Chelsea played Away, and if you choose Home, it lists all games where Chelsea played at Home.

These types of stats are great for fans and for betters alike.

Overall, the layout of the app is pretty cool, but i felt that there was too much information on the H2H page. It showed pairings of data for both teams in a match all on one page. I would recommend moving to a different page and displaying those stats for each, one at a time.

Barring that, Live Football Stats and Scores is chock full of information that any football fan should not live without. Easy to use and up to date, it keeps you in the game.

Dan RubiniPad Apps
Kids are a lot smarter than we think, and when we give them the tools to learn, they will. Not …
END_OF_DOCUMENT_TOKEN_TO_BE_REPLACED

Sleep by MotionX Lets You Sleep in Peace

Dan RubiniPhone Apps
Puzzle solvers rejoice!! If you love puzzles that stretch and exercise the mind but entertain as well, then you have …
END_OF_DOCUMENT_TOKEN_TO_BE_REPLACED

Dan RubiniPhone Apps
We all have the best of intentions when it comes to our health and eating right. We also know that …
END_OF_DOCUMENT_TOKEN_TO_BE_REPLACED