For those of you who are crazy about stacking games, it’s time to take on a different kind of challenge. MaxDominator is a game where you work quickly to catch, adjust and place cascading dominos in such a way as to clear the screen as much as possible.

It is similar to other stacking games in which you have to move and rotate pieces so that they fit well in the spaces available but also allow for more pieces to fit, too. In this game, however, your pieces are actually domino tiles and your aim is to place the tiles so that one side or the other, or even both, match a tile that is already sitting at the bottom of the screen. Do that and you will eliminate those tiles from the playing space, which is what you want. It allows for more dominos to fall, which earn you more points.

Gameplay is very simple, but it’s wise to read up on what to expect before you start. You can find details in the Tutorial area. While a bit difficult to use at first, the Tutorial area allows you to get a tour of the different screens and buttons. 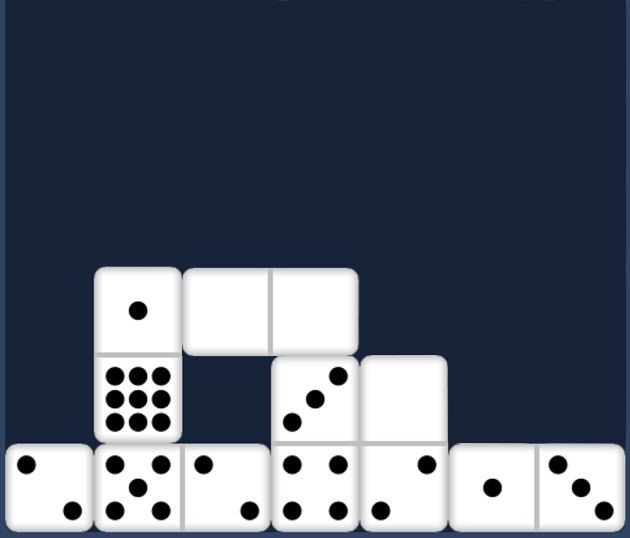 In order to do this, you tap on Tutorial, then tap on Game Screens and tap outside of the Tutorial area. Then tap on an area of the app that you want to learn about. This app will provide a guide on the screen, its buttons and what to do to perform the actions you need.

Once you get past that, you can actually start playing. Game play is fairly straightforward. The controls to move each domino can be found at the bottom of the screen. The arrows say it all. I will admit to all that in my haste to play, I failed to use the movement buttons and ended trying to tap and move the domino on my own, resulting is epic failures, at least for me. Swiping your domino left and right is supported; but, trust me, you get far better results using the buttons!

As stated earlier, I was not fond of the Tutorial area of the app, because it was not clear as to how to see any of the tutorials until I tapped around a bit more. That’s when I discovered that there really was a tutorial and that it provided a basic navigation and explanation of the different areas of the app.

In all, MaxDominator is fun to play and easy to get the hang of once you play it few times. The app itself is forgiving, allowing you to redo games and retry them so you can get better. There are no lives lost and no coins to spend. You just get increasing levels of challenge and better entertainment.

Dan RubiniPhone Apps
Running games keep you on your toes and entertain young and old alike. You get them in all sorts of …
END_OF_DOCUMENT_TOKEN_TO_BE_REPLACED

Coach Guitar – Learn to Play the Strings on Your Own Schedule

Dan RubiniPhone Apps
Playing the guitar does not have to be a dream that never comes true. Even if you don’t have a …
END_OF_DOCUMENT_TOKEN_TO_BE_REPLACED

Dan RubiniPhone Apps
Exercise is essential to keeping well, but sometimes we can get bored with the workouts we do. It’s so important …
END_OF_DOCUMENT_TOKEN_TO_BE_REPLACED

Dan RubiniPhone Apps
Dogs are a man’s best friend. So many households own a dog, or even more than one. I love dogs, …
END_OF_DOCUMENT_TOKEN_TO_BE_REPLACED
2