Dogs are a man’s best friend. So many households own a dog, or even more than one. I love dogs, but not when they are waking me up in the middle of the night with their barking.

It wasn’t even my dogs that were doing the barking; it was the neighbor’s. But once one dog started, the rest joined in to form a community chorus.

My neighbor didn’t believe it was his dog starting the ruckus, so I got Bark’n Mad to prove him wrong.

The app works exactly as described. I set it up one night and recorded through dawn. I used an iPad. It didn’t drain the battery or use excessive amounts of storage.

I did not want to leave the iPad outside of course, so I used the Bluetooth capability. I left the Bluetooth device outside to record the barking and kept my iPad safely locked indoors. I wasn’t sure if the connection would hold or if I would get good results, but it worked. 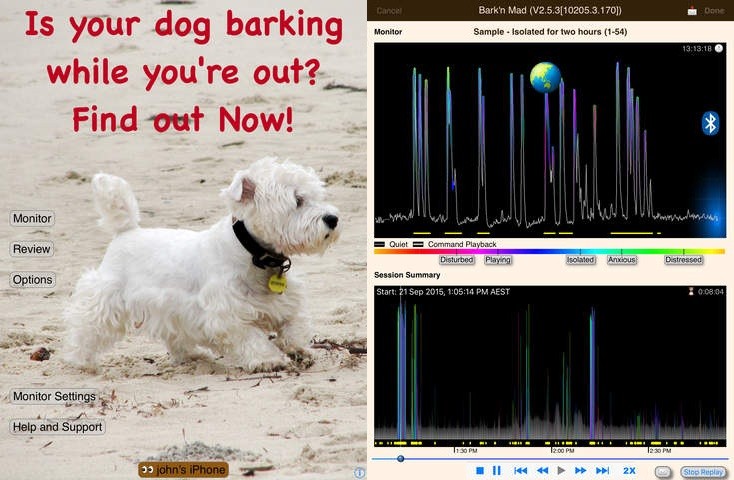 When morning came, I was able to scroll through the whole recording. Not only did I see when the barking started, I could tell why. Turns out, the neighbor’s dog got really excited at one in the morning.

Bark’n Mad uses audio frequencies to tell why your dog is being talkative. I didn’t even know that was possible!

Bark’n Mad also lets you download the recordings. I did some detective work and sent over the evidence and my conclusions to my neighbor. Thankfully, he was accepting about the whole thing. Then, he asked what product I used to gain the information.

Soon after I gave him the name of the app, the midnight howling ceased.

I was still curious about the app though, so I set it up one day to spy on my own dogs. I haven’t ever received any complaints, but I wanted to know how well behaved they were. It was really interesting to see what they got up to during the day.

I haven’t had to use the reprimand and praise options, but they sound like invaluable tools for training. There’s the ability to change the time it takes to start reprimands and the timing of them.

The app is not the most aesthetically pleasing, but it works really well. It does everything it says it will. I would recommend Bark’n Mad to any dog owner.

Dan RubiniPhone Apps
Pictures are a medium we use to share ourselves with the world. They can hold happy memories. A powerful photo …
END_OF_DOCUMENT_TOKEN_TO_BE_REPLACED

Michael WalshAndroid Apps, iPhone Apps
According to recent research, 62% of people who use VPN daily are smartphone users. The stat showcases the increasing demand …
END_OF_DOCUMENT_TOKEN_TO_BE_REPLACED

Dan RubiniPhone Apps
Last year, Mohamed Elzankaly brought the iTunes community something different with the introduction of Tears of the Machine. Confusing on …
END_OF_DOCUMENT_TOKEN_TO_BE_REPLACED

Michael WalshiPhone Apps
If you are someone who switches from mobile data to a free Wi-Fi hotspot the moment your smartphone discovers one, …
END_OF_DOCUMENT_TOKEN_TO_BE_REPLACED