Ocean Hunt Offers a Lot of Fun and Challenge

With so many hunting games and apps out there today, they are all in danger of looking the same. With Ocean Hunt, however, Won-O-Soft has come up with a game that, while using a tried-and-tested game concept, promises to still offer a lot of fun and challenge for anyone who plays it. Players are given a limited amount of time to catch as many fish as they can by using a spear (to actually catch the fish) and a reel (to bring it in and accumulate points).

Using a spear, players will catch as many of the swimming fish as they can. All the fish that are caught must be reeled in out of the water to earn the points. It is simple enough: the more fish you catch, the higher your points will be. Ocean Hunt features a colorful underwater environment, with 28 different fish types and accompanied by perky tunes. To add to the level of difficulty, various flotsam and trash will also be floating around, making it more of a challenge to spear the fish. The player must avoid these pieces trash while playing.

Once you tap on the START tab, fish will start swimming in both directions across your screen. You should use your finger to swipe on the screen to adjust the aim or direction of the spear, which is located in the center top of the screen. Tapping on any part of the screen will release the spear, hitting on the targeted fish.

To reel in the caught fish, you must quickly turn on the Turn Reel System that will appear on the right side of the screen. Doing it quickly will ensure that the fish does not get away, and that you will earn points in as short a time as possible, so you can proceed to catch more fish. There is an online leaderboard for this app, which will motivate players to catch as many fish as they can and score high. 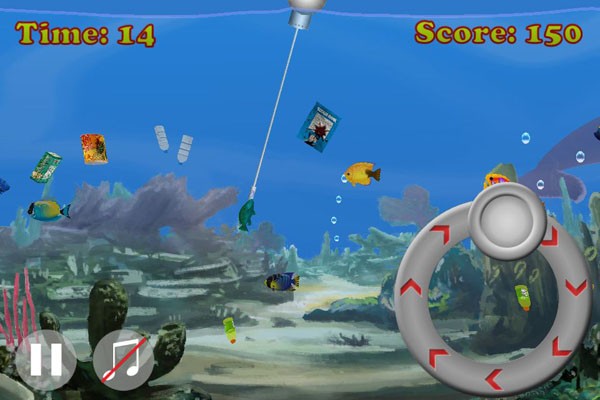 When it comes to being unique, some players would say that Ocean Hunt is anything but. After all, the game concept is already something that has been done many times over in the past. What makes this game unique, however, is the level of difficulty it poses. It is easy to learn, and it is definitely easy to play. However, mastering it is another matter entirely. Timing and speed are going to be very important and that is what makes this arcade game very addictive.

This fast-paced game’s gameplay can prove to be quite monotonous for those who are looking for more “action” in their mobile games. While it is true that it is challenging, it would have been better if more obstacles are included, just to up the ante. Those who are looking for a challenging mobile game will find it in Ocean Hunt. It can provide hours of fun and enjoyment, despite its simplicity and the risk of becoming tedious or monotonous after a while. The colorful interface, coupled with the catchy and infectious sounds and tunes, also adds an element of fun to the whole experience.

MoodBook – Chart Your Mood with a Fun Little App

Be Fit with Sportsman PRO. Workout

Dan RubinAndroid Apps
There are exercise apps all over the market but none are quite like this one. Losing weight can be super …
END_OF_DOCUMENT_TOKEN_TO_BE_REPLACED

Hero Legends Keeps You Glued on Your Seats

Dan RubinAndroid Apps
Gamers love a challenge – always. Some gamers go for speed to test their reflexes, other gamers like a game …
END_OF_DOCUMENT_TOKEN_TO_BE_REPLACED