Books baffle the mind and force us to think outside the box. They take us to new places. They allow us to see new things. Even though all we are looking at are words on a page.

Imagine if the book provided all of the elements your imagination conjures up when you read. The sounds that play in your head, and the pictures you paint in your mind would now leap off the pages of the book.

These things I describe are all too real in Rich Shapero’s TooFar Media: Immersive Story Experiences.

Download this app because you are not going to believe what you see. This app comes with a preloaded story and three others you can download, so be sure to have the bandwidth and the time.

Too Far: An exhilarating and heart-breaking story of an end to innocence that follows two six-year olds as they take refuge from their turbulent homes by exploring the mysterious wooldland beyond.

Arms from the Sea: A young sculptor from the State of Salt swallows a poison pill that transports him to a watery heaven, whose monstrous, seductive creator reveals to him what it might mean to redeem a desolate world. 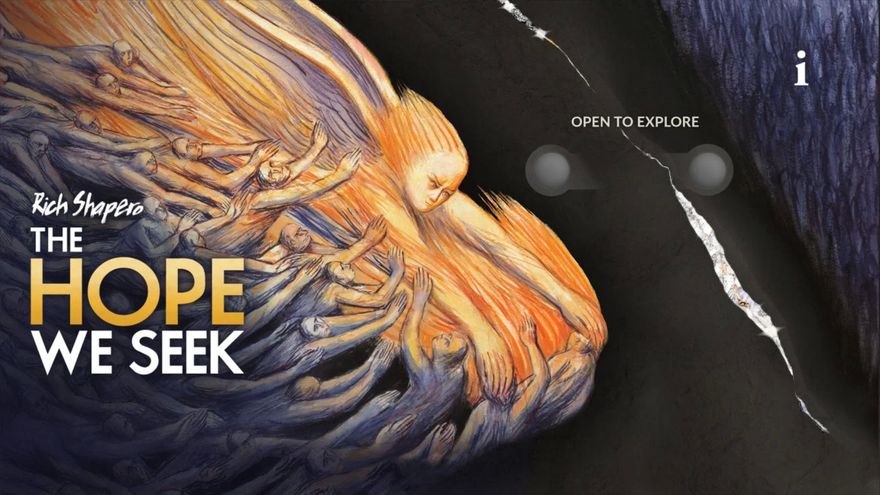 The Hope We Seek: Zachary Knox, “the Bull’s-Eye Telepath,” heads north in search of gold, arriving at a mining camp where arduous labor, sustained by belief in the cult of Hope, promises an unearthly reward.

Wild Animus: The quest for a “bliss beyond fear” drives a young idealist to the Alaskan wilderness where, alone with his dangerous ideas, he transforms himself into a wild creature, prey to a strangely familiar pack of wolves.

So, what makes this app different than other reading apps? This app contains stories that are more than just your typical printed word. Each story comes elaborately enhanced with artistic embellishments. By this, I mean an amazing collaboration of sights and sounds that pull you into the story and erase the world around you.

First off, you have songs that were carefully crafted to match each moment in the story, almost as if you were watching a movie. Next, there is art on each page that puts meaning into each word and helps you create the setting and emotion.

When you enter the app and after you download the books you are interested in, you can swipe left and right to get to each story. From there to enter the story and move further into it, you do a double swipe from the middle outward. To me, it was as if I was opening the door to the next room.

I have to say that the overall layout of the app and maneuverability within is easy to master, but initially, I was a bit lost, and later found it was easy to jump to chapters within each book, which made it extremely easy to get to where I wanted when I left off.

I have just finished one book and look forward to diving into the next. I have never seen such an experience before and I highly recommend TooFar Media to anyone who loves literature, music and visual art.

Dan RubinAndroid Apps
Most apps today claim to have new features, settings and applications within the app. The battery charger alarm does not …
END_OF_DOCUMENT_TOKEN_TO_BE_REPLACED

Trail the tail – Fun App Where Kids Follow, Find and Learn About Animals

Dan RubiniPad Apps
Kids love to learn and explore, but don’t always have the opportunity to experience firsthand different places and things. When …
END_OF_DOCUMENT_TOKEN_TO_BE_REPLACED

Dan RubiniPad Apps, Mac Apps, Other Apps
Making the perfect presentation is not always intuitive. It takes a lot of creativity and time to piece together content …
END_OF_DOCUMENT_TOKEN_TO_BE_REPLACED

Dan RubiniPad Apps
Restaurant management has taken leaps and bounds when it comes to increasing efficiencies and improving up on the customer experience. …
END_OF_DOCUMENT_TOKEN_TO_BE_REPLACED