Towers Battle Solitaire – Up the Ante with Your Solitaire Game

Lovers of games like Tri-Peaks, Pyramid, Freecell, and of course, Solitaire can now take their game up a new notches by downloading and playing Towers Battle Solitaire. At first, it sounds like a tower battle game, but is far from that. This app takes the well known and well loved game of Solitaire and gives it a new twist.

The stakes are not too high; there is no real money involved. However, what you do get is a chance to win some fun prizes; and the more players that join a game, the better the prizes.

The app is free, and provides hours of entertainment on both your iPhone and iPad. I prefer playing on the iPad so I can see the cards and the playing table better.

When you first download the app you will see what looks like a card playing table, complete with the green felt and all. You will also see that there are other players involved, because there will be cards handed out on all sides of the screen, or rather, the playing table.

The main menu offers tips and pointers on how to play for newbies, so don’t worry if you are Solitaire expert, but are not sure about player against others. There are several opportunities for trying out smaller games, while working your way up to tournaments. Some tournaments last for an entire day, so if you really get good, you can dive deep and go all in. 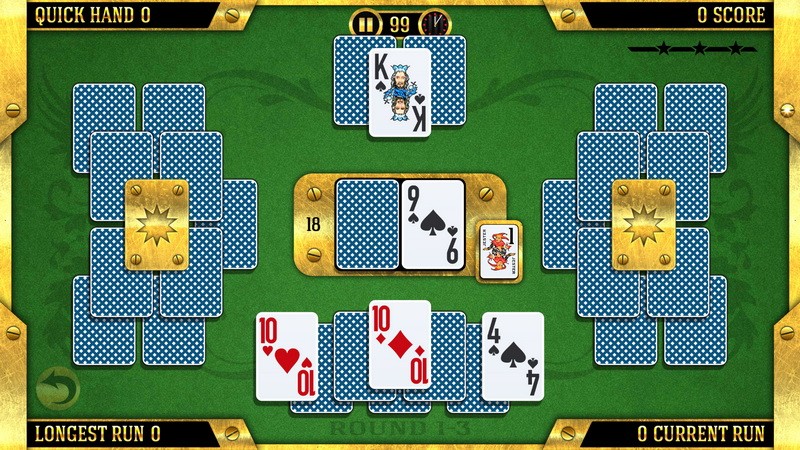 To play the game, users choose a card that is higher or lower in value than the card in the center pile from any of the collections on the playing table. Coins are involved, so be aware that you need to maintain enough to stay in the game. Ultimately, the goal is to clear your playing area, just as in Solitaire. A way to score big is to have a run. This happens when several matching cards are stacked in succession, called a “Run.”

Rounds can go on for a while, and if you are running out of coins to stay in the game, then you have an option to purchase more coins and keep playing.

I like that the game is free, but I do have to say that the amount of time allotted for “free” playtime can pass by quickly, forcing you to make an in app purchase.  So, its lure is a bit sneaky, and it would be nice if it wasn’t.

Nonetheless, Towers Battle Solitaire is still a crowd pleaser and it lets you engage with fellow players who love the same. Solitaire has never been this much fun, and once you start you will not be able stop. The excitement escalates as you sign up for more games and tournaments, so get set and go.

Baby’s Brilliant Keeps Kids Quiet and Engaged While They Learn

Dan RubiniPhone Apps
Are you a new parent seeking solace and solitude? We’re not accusing you of being selfish, but anyone who is …
END_OF_DOCUMENT_TOKEN_TO_BE_REPLACED

Dan RubinAndroid Apps, Uncategorized
It is an adventurous puzzle game playable on almost all smart phones with the latest android versions. It involves exploring …
END_OF_DOCUMENT_TOKEN_TO_BE_REPLACED

The Most Exciting Android Accessory that Never Took Off

Dan RubinAndroid Apps
In this day and age everything we have is controlled by passwords and locks. Social media, email, our cellphones and …
END_OF_DOCUMENT_TOKEN_TO_BE_REPLACED