Kids are learning to read at a very young age these days and parents who are looking to make the art of learning letters and their sounds an easier task are in luck. Preschool University has taken phonics to a whole new level of understandability by embedding the learning process into games and activities.

ABC Magic Phonics is filled with colorful graphics and amusing sounds that keep kids asking for more. They won’t be able to get enough of the app, and parents will see quick results.

Free to download, ABC Magic Phonics offers a variety of games for early learners. The app relies on teaching sounds of each letter, in lower case only. Learning both upper and lower case only adds to the symbol set that kids need to memorize. The app focuses on lower case first and the sounds, not the names.

In one game, players are introduced to the letters, one at a time, along with the sound and a graphic of an item that begins with that letter’s sound. The music and rhythms that play along help emphasize what the child sees on the screen. It’s amazing to see how kids are drawn to what the app displays and how it keeps kids engaged. 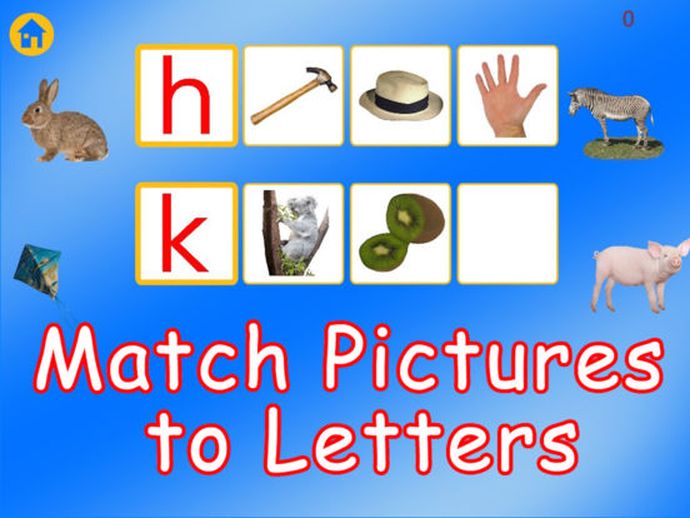 In one game, the app shows the letter and one image. In another game, the app shows one letter and four images whose name will be spoken by the app when tapped on. A third game challenges kids to figure out which item begins with the given letter based on its sound. An example is the letter ‘a’, whose sound is as it’s used in the word “apple.” Other images will show an astronaut, a rose, and a ladder. Kids of course must choose the astronaut in order to correctly fill a blank spot.

In the options section, parents can select the words their kids can learn or choose all. You can even select a different color for the vowels. The apps voice can be female, male, or random.

I really thought the developers did a great job of incorporating clean images with clear sounds that helped kids learn proper sounding of the letters. I also liked the color scheme. It was in line with what preschoolers are used to seeing and it drew them in like a magnet.

What would be really neat is the ability to write out the letter at some point in time after the sound and recognition have been mastered. This will further the child’s memory of the letter and its sound and how it is used in a word.

This would be a nice improvement, but as is, ABC Magic Phonics is a treasure for parents looking to help their kids get a head start to reading or just give them more practice with sounds so they are ready to go when they start school.

Dan RubiniPhone Apps
If you are looking for a challenging shooter game and haven’t found it, look no further. Sniper Ops 3D tests …
END_OF_DOCUMENT_TOKEN_TO_BE_REPLACED

Dan RubiniPad Apps
Kids are a lot smarter than we think, and when we give them the tools to learn, they will. Not …
END_OF_DOCUMENT_TOKEN_TO_BE_REPLACED

Dan RubiniPad Apps
Admit it, you have wanted to see the world for years, but were too scared that the experience would fall …
END_OF_DOCUMENT_TOKEN_TO_BE_REPLACED

Top-rated Self-learning App for Your Kid in 2022 – LogicLike: Games for Kids

Michael WalshiPad Apps
Not all screen time is negative. Experts agree that learning apps for kids can be fun, engaging, and interactive. They …
END_OF_DOCUMENT_TOKEN_TO_BE_REPLACED