Everyone loves a good beat, and paired with a fun app, nothing can be better. Amazing Beat sounds like it would be a music mixing or listening app, but it’s a bit more than that. It tests your senses and puts your hand-eye plus hand-ear coordination to the test. The app pulses out five categories of music, letting you make the choice and playing it up in the background.

You might wonder how a beat can be matched to a game. But once you start things up, you will see. Fast-paced and sometimes fiery, the app then sends circles and squares almost representing the notes or pulses of the music’s beat. Your job is to tap either to the right or left to match the symbol. Sounds easy, but it can get extremely challenging. The first few rounds come at a pace that is palatable. Once you move past those, the beat comes fast and you are thrown into a frenzy trying to keep pace with the music, matching your taps as each symbol falls from the top of the screen down to the floor.

The playing screen is vertical and while the game is quite simple, it lacks a few help messages, an intro and an explanation, with enough details, of what to do. You kind of have to just play around with it to get an idea as to what is required to play. The first round is at a pace that allows you as a newbie to understand what you need to do as the symbols appear and travel down a vertical line. If you see a circle, you tap on the right side of the screen. If you see a square, you tap on the left just as you see it and before it reaches the end of its line. This signals to the app that you have detected the right symbol at the right time. 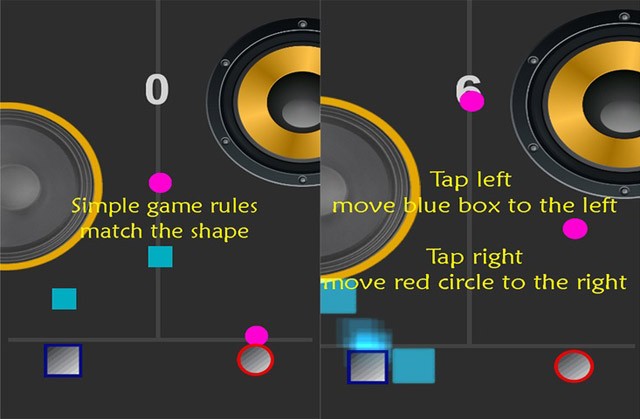 If you tap incorrectly, the symbol crashes and the game is done. The truly unfortunate deal with this game was that the player was not given a few chances to miss a few beat. Once you tap incorrectly; and I mean just once, it’s game over. You can do a redo, and replay the game, but I oftentimes felt the pace got faster and more frantic.

What was disappointing with this game, and almost a turn off, was how quickly the pace picks up. There is not much time given to get used to how the game works and how to get a sense of seeing/hearing the beat and quickly tapping in reaction to it. A longer tutorial or a few intro games or levels would be nice. If you are adept at fast-paced games and have a keen ear that coordinates with quick taps, you may just be a natural at this game and Amazing Beat may serve as a great filler for those times when you need a simple game to play.

Dan RubiniPhone Apps
Looking for a way to make your chats more interesting, much more impactive and amazingly expressive? Simple fonts can only …
END_OF_DOCUMENT_TOKEN_TO_BE_REPLACED

Dan RubiniPhone Apps
Pictures are a medium we use to share ourselves with the world. They can hold happy memories. A powerful photo …
END_OF_DOCUMENT_TOKEN_TO_BE_REPLACED

Dan RubiniPhone Apps
Want to get the leg up on your fellow fantasy football managers before it’s too late, and you lose the …
END_OF_DOCUMENT_TOKEN_TO_BE_REPLACED