TimeTravelRome – Rome in a Day – or at Least Whenever You Want

Not everyone is so lucky to be able to travel to Rome, much less see all the great cities and landmarks that once were a part of one of the greatest empires known to man. If you have always had a fancy to learn more about these cities and places so far away and how they might have played a part in the empire, TimeTravelRome is the easiest and cheapest way to do so.

TimeTravelRome is a free to download app that is pretty much a mobile encyclopedia on Roman Empire from Great Britain to Turkey. It is very well laid out and easy to read. If you are more graphics oriented, you can view a map of the empire, zoom in and out as you need, and choose cities and sites that catch your fancy to learn more about them.

If you like lists, you can view the cities and sites in a list which also shows you a rating between 1 to 5 stars. In both cases, if you happen to know of a site or city you want to learn more about, you can simply type it into the Search window and go. The rating is provided by trained historians and archaeologists who have traveled to those places, so you have an idea of whether or not that site is worth visiting. 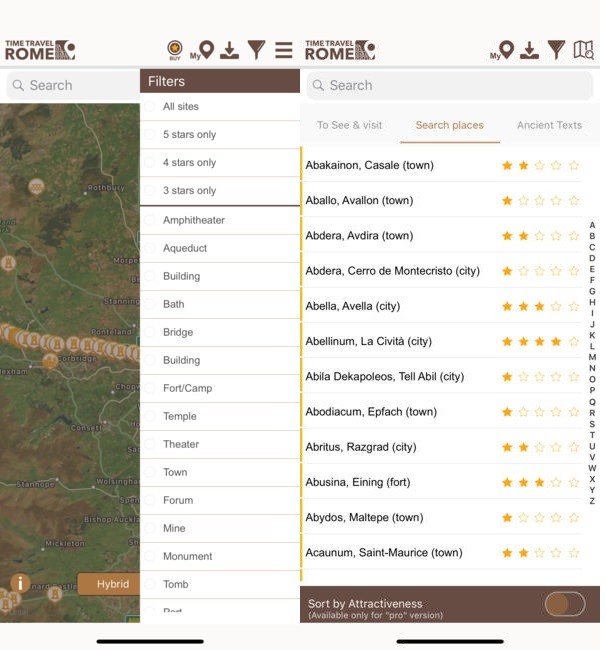 You can also filter the map on several different categories like ratings (3 stars, 4 stars, 5 stars), type of artifact (building, monument, aqueduct, city, temple, camp, tomb, bath, bridge and more). This works on the maps and populates the map based on your filter.

Speaking of visiting, I touted the app to be more of an educational tool, which it is highly able to be, but it also serves as a great way to plan your trip to the various places that once were Rome, so you can pick and choose, based on others’ experiences, the sites you want to add to your trip.

When you find the place you want to learn more about, you will be able to select from a slew of options. Links to Wikipedia in several different languages are made available just below four different pieces of information provided by the app: About, To See & Visit, Nearby, Ancient Texts.

About gives you an overview about the site or city. It talks about who founded or created it, around what time in history, where it’s located in reference to modern day sites, and more. To See & Visit provides information of things to see and do in the vicinity of this Roman site. Nearby provides information of other things to see and do around the area, so you are not travelling miles to a site, only to see just the site. Ancient Texts is a really cool option. It lists the various types of doctrines, laws and documents that were in place at the time the chosen site was part of the Roman empire. You can actually read the documents.

Lastly, as you find places that interest you or need to bookmark for future reference, you can them in My Places. My Places can have folders that you name to represent groupings. It can be “Sites in Pompeii” or “Things to do in Rome”. This gives you a quick reference to what’s most important to you.

The app will soon be releasing with hundreds of new sites soon, with additional bug fixes. The app continues to grow over time, and currently provides access to over 3000 proprietary articles on Roman monuments and over 300 ancient texts, making us the top guide app for the ancient world and a top pick for educators everywhere.

While the app has a few hiccups and quirks now and then, it always seems to bounce back and bring information to you easily. You don’t have to go to the documents, TimeTravelRome has brought them to you.

If you are history fanatic or are looking to plan a trip to these places, I would highly recommend downloading TimeTravelRome and learning all about the wonders of ancient Roman empire.

Dan RubinMac Apps
If you’re in the following situation and wish there was a solution, you are not alone. You have found picture …
END_OF_DOCUMENT_TOKEN_TO_BE_REPLACED

TaoMix 2 Customizes the Calm that Surrounds You

Dan RubiniPhone Apps
Are you stressed? Do you need an escape? We all could use some time away from the fuss and frantic; …
END_OF_DOCUMENT_TOKEN_TO_BE_REPLACED
1

Dan RubiniPhone Apps
Games fulfil some of our needs, like becoming in authority, a rebel, or even childhood needs. As sometimes people get …
END_OF_DOCUMENT_TOKEN_TO_BE_REPLACED

Dan RubiniPhone Apps
Ever wanted to learn how to play guitar, but never got the chance? There are so many ways outside of …
END_OF_DOCUMENT_TOKEN_TO_BE_REPLACED