Have you ever been driving around town and noticed something that you just had to share with your friends? Maybe it was a really cool new restaurant that just opened, or a random celebrity sighting; whatever the case, you just wanted to get the word out right at that moment, because it just couldn’t wait. However, you were driving, and so tweeting the news just wasn’t going to happen at that moment. Well, now you can send out a verbal message when the news can’t wait. MotorMouth, created by Dan Jacoby, is the perfect app. It lets you record a message with a quick tap of your finger. After that, all of your friends who are following you will hear what you have to say.

This app runs on iPhone, iPod Touch and on iPads, so no matter what device you are toting around, you can check-in with some interested feedback on what’s happening in your neck of the woods. It is incredibly easy to use, because all you do is tap a record button. Once you press stop, the message gets posted and you are on the map! Want to hear what’s happening around you? You can select the range of miles for which you wish to hear messages. Messages that are left show on the map (main screen) as orange drops. Tap on one, press play and listen to what that person has to say. They may be catching a flight, dining in some new great restaurant, or maybe lost. OK, hopefully not lost…but you get the idea. 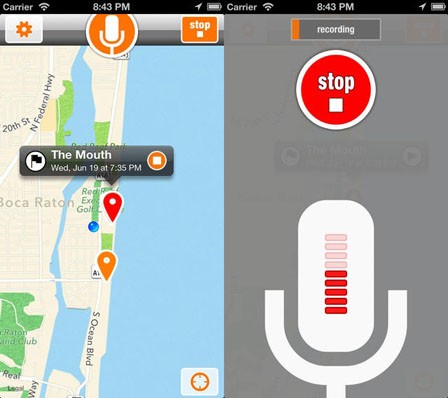 MotorMouth can be extremely useful as a safety tool, as well. Imagine you are stuck in traffic and there’s an accident up ahead that just happened. You could post that message warning others of the delay, you can even leave your location if you wish, but your message will show in the MotorMouth map in the location where you recorded it. It’s like a real-time traffic-reporting tool if enough people post such updates. You could be traveling to a new city, exploring its wonders and casually posting where you are every so often, maybe even leaving tidbits about wonders around you. This could come in very handy if you are lost, need to be found, and GPS just isn’t cutting it. Your descriptions of places you are seeing become the locators.

Listening to posts is simple. Tap on a marker that you see on the app’s main screen, which is basically a map, and then press play. Messages are brief and to the point. You can also stop the message; however, you cannot pause it. It would be nice to be able to pause a message – maybe not really necessary, but that way you could restart it instead of listening to it from the beginning.

MotorMouth is so simple, but its uses will expand far beyond what they are on the surface. I can see the information that is being left by users of this app serving other apps so well. It’s like a tweet that you can hear, and let’s face it, we should not be looking at our phones as we drive. We can, however, listen to posts that are left in this app very easily. This is definite download for anyone who likes to share and stay connected while they’re on the go.

Dan RubiniPhone Apps
Many of us are very in tune with who is doing what in the world of A-list celebrities and socialites. …
END_OF_DOCUMENT_TOKEN_TO_BE_REPLACED

Dan RubinAndroid Apps, iPhone Apps
Membership at a gym used to be the “in” thing. Whether you had one to actually exercise or just to …
END_OF_DOCUMENT_TOKEN_TO_BE_REPLACED

Reach for the Skies Makes Learning Feel like Playing a Game

Dan RubiniPhone Apps
Do you like entertaining flying or racing games in which you have to avoid obstacles and collect rewards? Are you …
END_OF_DOCUMENT_TOKEN_TO_BE_REPLACED

Dan RubiniPhone Apps
If you love to shop and you consider yourself a fashion expert, then consider downloading Stylematch from Stylematch Pty Ltd. …
END_OF_DOCUMENT_TOKEN_TO_BE_REPLACED