Space Wars is a very simple game and anyone who is not familiar or has the least knowledge about the game can begin playing this in no time. The player needs to guide the spaceship around the screen shooting the invading enemies and avoiding bullets while collecting power-ups. There are different power-ups and the player gets to keep the power unless they are hit by a ring that defaults you back to the basic weapon. Losing life before level 25 also degrades all power-ups earned.

Space wars is a fun and addictive game can be played by starting off with the basic weapon. One does not need any guidance or tutorials to play this game. The player guides the spaceship to the left or right of the screen using either left and right arrows on screen or using the accelerometer; that is by tilting the screen. The player can enable auto-fire in the options or can shoot by just tapping the screen so that they have control over when to shoot.

You need to guard the spaceship from the bullets dropped by the enemies. Killing certain type of enemies gives you different types of power-ups that can be picked to increase gun power. You need to stay away from the rings that keep falling down as they will degrade your ship to one with a basic weapon. At times a mother-ship may pass by and shooting it enables the chance for a blue colored bomb. Picking up this bomb will wipe off all the enemies on the screen and the level will thus be completed automatically. Sometimes there are falling spaceships and if collected will give you an extra life. So watch out for the blue bomb and falling spaceships as they enable you to play longer. 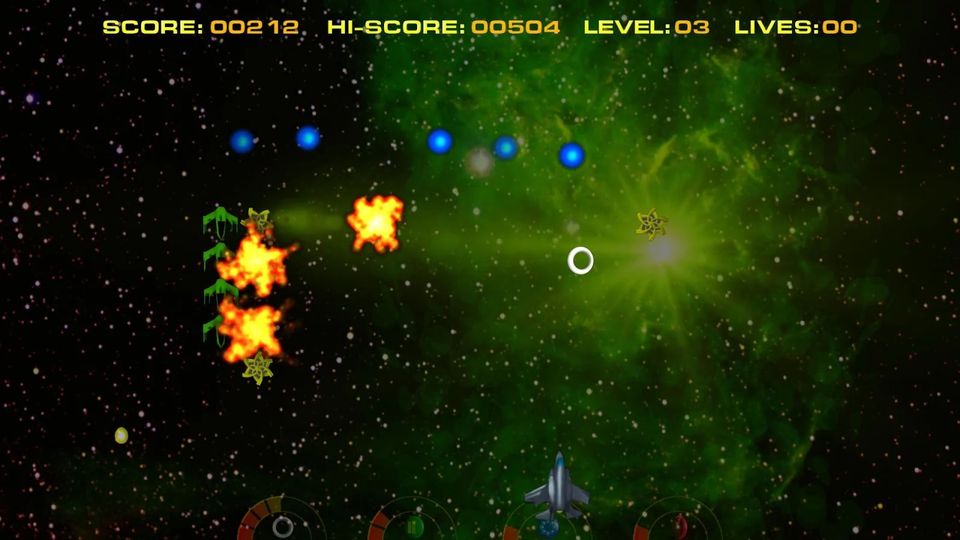 You need to try and be quick in shooting off all the enemies on the screen strategically because as the time increases, the enemies start descending which means you have very little space to move around and to escape the dropping bullets. When there are the last few enemies left on the screen, they can move around at a greater speed while dropping bullets making it a bit difficult for the player to shoot them.

The graphics in the Space Wars game gives it a classic or vintage look and the music gives it a nostalgic feel. It is smooth to play with and the features are not complicated, but very straightforward. It has 50 challenging levels and 6 power-ups which are twin gun when you pick up a green power-up, laser for a red power-up, 8 bullets for a blue power-up, shield for a yellow ring power-up, bomb and additional life.

You can share your score with your friends on Facebook or compare your score with other players on the leaderboard that can lead to taking up game challenges. Players who like to be competitive can take advantage of the feature that Space Wars has included. It has a leaderboard that features your own high scores, worldwide overall high scores, and worldwide daily high scores. It also gives you numbers on how many games you have played and how many games have been played by people around the world.

Ads on the main screen are a disadvantage but are not very distractive. There are also ads that pop up on the screen in between levels. These can be removed for a small price.

Dan RubinAndroid Apps
Defense of Egypt is a game of the genre Tower Defense, as the setting is of ancient Egypt and the …
END_OF_DOCUMENT_TOKEN_TO_BE_REPLACED

Dan RubinAndroid Apps, iPhone Apps
Puzzles can be tons of fun, if you like anything that’s detailed and works your mind. Now, you can enjoy …
END_OF_DOCUMENT_TOKEN_TO_BE_REPLACED

Exercise Your Logical Process with Motivation

Dan RubinAndroid Apps
With so many brain and puzzle games coming out today, you’d think you’ve seen them all. Then Oasis Studios came …
END_OF_DOCUMENT_TOKEN_TO_BE_REPLACED

Dan RubinAndroid Apps, iPhone Apps
If you need some straightforward, to-the-point search results- done in a rapid manner too- you don’t have to look much …
END_OF_DOCUMENT_TOKEN_TO_BE_REPLACED