The game story is around a prophet, Mefasim, who found the player, and thinks that the player is the one who can save his world Azedeem from the upcoming danger it will face. During the scenario, the prophet explains that the player, according to his visions, will gain great power and will face various enemies, including demons and sects. Even if the player’s path would be harsh, he will gain aid from many heroes to help him progress, gaining power to finally save Azedeem.

The main point of this game is to gather and level up many heroes and make them fight in different areas of the game. Heroes can be summoned with thirty pieces of fragments and with summoning stones. Those fragments can be found in many areas of the game like adventure mode and dungeons, and each fragment has a rarity type. Using fragments to summon a new hero is done by clicking of the fragments in the inventory (but must have at least 30 pieces of each kind of fragments). Summoning stones can be bought at the market, dropped in dungeons, but it’s also possible to get them as quests rewards. 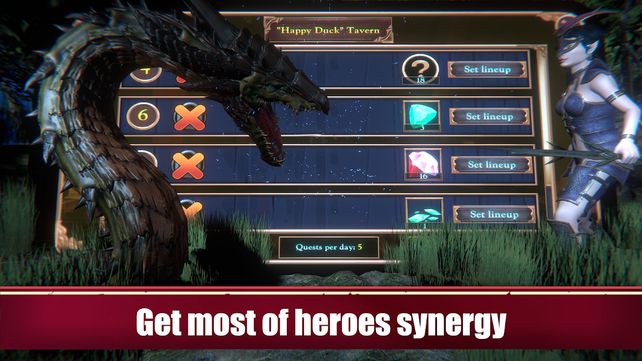 The fighting system is a tactical RPG type. The map is 12×7 block area with random traps, obstacles and layouts. Each team starts by facing the opponent team, as far as possible. The positioning of starting units in each team depends on the placement order before the fight. But on such a large field, there’s no way to predict where each mob will be exactly placed when the battle will start. Fighting rewards are mostly game resources and hero’s fragments. The player can also use spells scrolls in battle to help his heroes, but those scrolls must be equipped before the fight starts.

Each hero of the game has a certain power level according to his stats and skills. The team’s power is the sum of the hero’s power of every hero in the team. Depending on the level of game, it’s recommended to have a certain team’s power level before starting a fight. Opponent’s power level is shown before the match starts.

Heroes are subdivided in classes, rarity and faction. They are five factions (human, orc, elf, monster and ogre), five classes (archer, assassin, mage, priest and warrior) and four level of rarity (common, rare, unique and epic).  It’s possible to trade a hero for another hero, but of the same rarity. The trade can be done in the House of Heroes, but requires a material (mystical tome) that can be bought at the market or dropped in scenarios and dungeons. At the House of hero, it’s possible to evolve heroes by feeding to them heroes of the same class as mains materials, with others heroes and resources as sub evolving materials.

Another classic “gacha” game where you collect heroes. Azedeem: Heroes of the past is a tactical RPG game who combines the pleasure of the gacha type games with tactical fights, all in an RPG gameplay.

Dan RubiniPhone Apps
While its description makes it sound like a fairly simple game, it’s actually tougher than you think. Bing Bong is …
END_OF_DOCUMENT_TOKEN_TO_BE_REPLACED

Stoned Puzzles the Sharpest of Minds

Dan RubinAndroid Apps
If you’re a person that’s always up for a challenge, then I challenge you to try the Stoned puzzle app …
END_OF_DOCUMENT_TOKEN_TO_BE_REPLACED

Dan RubinAndroid Apps
Have you ever think that managing your budget and expense is how much important? Probably not because it just not …
END_OF_DOCUMENT_TOKEN_TO_BE_REPLACED