Monitor Your Android Device with SpyWarn

There is one thing that a spy can never thrive without. This one thing is a communication medium. A spy must have a way of sending and sometimes receiving information. This is the reasoning behind the creation of SpyWarn. Unlike antivirus apps that try to identify harmful files and apps by checking them against a database with known harmful apps, SpyWarn looks at the behavior of the suspect apps. Is this approach effective in finding harmful applications and keeping you safe? Read on to find out

Just like the name suggests, SpyWarn is an app that has been built to warn Android users whenever there is a potential risk. It monitors all the installed applications and gives alerts whenever something looks scary. There is also an alert that checks if your phone’s microphone and data transmitter are on at the same time. Basically, this app tries to perform all possible checks that can establish whether or not somebody is using your phone to get information about you without your knowledge. Needless to say, this app brings a modern solution to the ordinary Android user. What’s more? It’s easy to use and intuitive!

Just like any other Android application available from anywhere, you need to first verify that you have a supported device. Installation is simple and straightforward and doesn’t require any special technical know-how. After installation, the first screen will be something close to what many people would think is a media player. There’s a large round play ‘button’ at the center of the screen and the words Start Test immediately above it. Tapping on this button will take you directly to the survey which is used to give the app some background information about your phone and generally the usage. 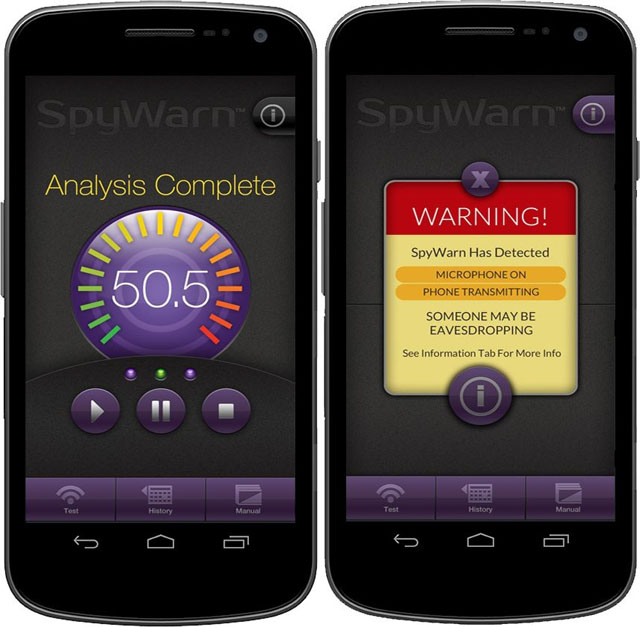 After taking the test, you have the option of running an analysis of your phone’s activity. Apart from setting the time that you want the analysis to run, you won’t need to input any data into the app. All the work is done automatically for you and you only have to sit back and relax as you wait for the results. The results are saved in the history tab for future reference. You can also read about spying and your security when using mobile phones from the included eBook titled “Is My Cell Phone Bugged” by Kelvin D. Murray (Hardcover version available at $17.95).

One unique aspect of this app is the real time guard that notifies you whenever the microphone and transmitter are working concurrently. Although this is not a fool-proof method of telling that you are being spied on, it’s a reason for you to do some extra investigation to verify that someone is not listening in on your conversations. Another unique aspect is the eBook that you get for free just by buying the app. This eBook is very informative and comes with a lot of information concerning spying and mobile phones.

One thing that turned out to be very annoying in the app is the alert during calls. Sometimes an app may be synchronizing data (causing the transmitter to work) during a call (microphone is on). This will cause the app to give an alert that someone may be spying on you. While this alert is normally hard to notice on regular calls to friends, if you need to use the dial pad during the call (like in the case of an automated voice response when you need to press some keys), this alert can turn out to be very annoying. Maybe the developers can come up with a smaller alert that doesn’t cover the entire screen. That aside, SpyWarn is a wonderful idea and very useful.

Developer’s response: SpyWarn is a stand-alone test. It should be run only when the phone isn’t engaged in other activities. Basic rule, run the test, don’t do anything else with your phone during that time. There is one exception to the rule. Say your not using your phone (watching TV, dining, etc.) and it is on the table next to you. You can run SpyWarn™ in the background… to detect spyware or baseband eavesdropping activation of the phone. If the banner pops up when you are not making a call, it is 100% assurance you are being spied upon, at that moment, live.

Dan RubiniPhone Apps
With recent revelations of increased spying by News agencies, the NSA and other government agencies, it has become clear that …
END_OF_DOCUMENT_TOKEN_TO_BE_REPLACED

Michael WalshAndroid Apps
If you want to create or generate a perfect logo design for your brand, you will have landed in the …
END_OF_DOCUMENT_TOKEN_TO_BE_REPLACED

Michael WalshAndroid Apps
An unexpected turn of events may lift you up or bring you down. In a fast-paced work environment and world, …
END_OF_DOCUMENT_TOKEN_TO_BE_REPLACED