If you love numbers and math, then there is a game that you should consider downloading. It’s called Seqitaire, kind of a play on words with solitaire, but the game play is very different and far more involved.

In this game, your ability to string numbers and relate them in such a way as to get the right resulting number is key. This game exercises math, pattern-matching, and logic skills all at once. And, while it sounds daunting, it really is not. You don’t get penalized for not being able to finish. Instead, you are given chances to try the game over again – making it a great learning tool.

I found this game to be a great entertainment vehicle. As I was playing around with it for my review, I could not put it down, which meant a much later bedtime than I’m used to. So, be aware that it can be addicting!

The game is a free download, but it does allow for in-app purchases, in case you need to buy some help. The basic setup of the game is that you will see a deck of cards from which you act on. Each card in this deck has a number, and possible a suit. Above this is a grid of tiles of varying values, suits and sometime wild card, denoted by a special symbol. Some of these tiles will be arithmetic expressions, like plus, minus, division and multiplication. 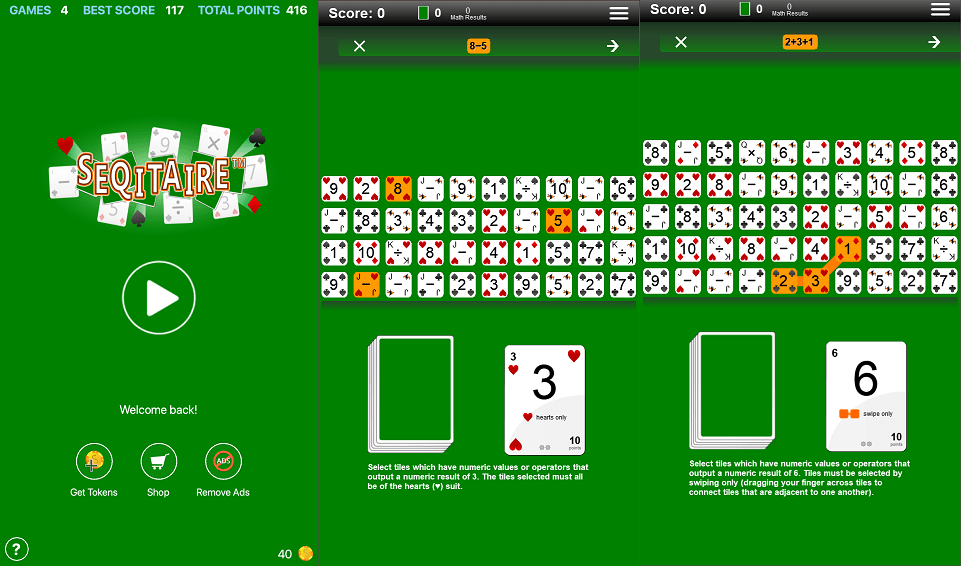 If you need assistance, the tutorial at the very start is very helpful in explaining the different types of special sequences you may be asked to select. Your end goal during each game is to complete each card in the deck. If you get stuck, you can tap the deck to draw the next card. After drawing all of the cards, the deck is reset so cards can be redrawn.. As you select tiles from the grid, they disappear. Be aware that if you are short on tiles needed to clear the last of the cards, the only saving grace you have at that point is if you can get more tiles added to the playing grid by drawing an “Add Tiles” action card. If you don’t, you may have to forfeit the game. I experienced this a few times, which means you need to do a better job of choosing what tiles you select earlier on in the game to make sure you have enough options for later.

Using the maximum number of tiles possible for tile submissions will earn you more points, but is not always wise if you end up running out of tiles needed to clear all of the cards. In all, there are 12 different card conditions to satisfy, to keep the game interesting. In later levels of the game, two cards are drawn from the deck at a time instead of one, meaning you have to earn the top-most drawn card before the one beneath it. The game is also single-player so there is no pressure to compete.

What would be nice is to have the option to choose the type of card you want to solve, like alternating suit, or a Run where you have to choose an expression comprising tiles in numerical order. This would help with normal game play.

Other than that, Seqitaire is great not only because it’s entertaining, but it can serve to strengthen arithmetic skills for all, whether you are in elementary school or just want to brush up. And you’ll be doing it while having fun!

Dan RubiniPhone Apps
These days gamers have their pick from a variety of gaming options. From high intensity battles to mind expanding educational …
END_OF_DOCUMENT_TOKEN_TO_BE_REPLACED

Systematize Your Daily Activities with FileCalendar

Victoria WilliamsiPhone Apps
Our daily activities have become increasingly complex over the years. Multi-tasking is a sine qua non if one has to …
END_OF_DOCUMENT_TOKEN_TO_BE_REPLACED

Dan RubinAndroid Apps, iPhone Apps
Paint House: Puzzle and Fun comes off as a very simple game that may not interest most people, but once …
END_OF_DOCUMENT_TOKEN_TO_BE_REPLACED

Reading Eggs for Kids of All Ages

Dan RubiniPhone Apps
Reading is an essential skill, no matter what you decide to do in life. Yet, so many kids get through …
END_OF_DOCUMENT_TOKEN_TO_BE_REPLACED